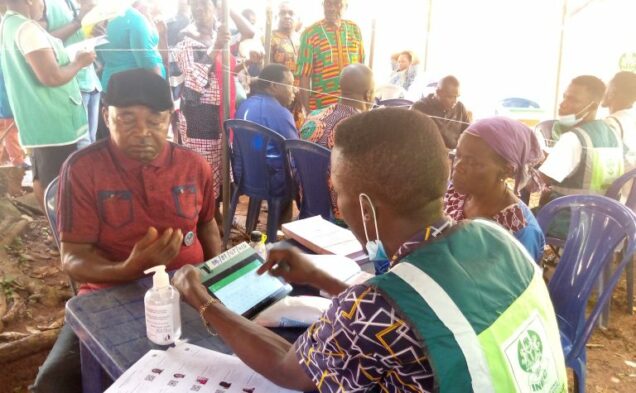 There was a large turnout of voters at the Amaesi Ward of Aguata Local Government Area of Anambra at the Saturday Governorship election in the state.

NAN reports that voters came out as early as 7.30 am until the arrival of electoral officers by 8.35 a.m at the ward.

The ward is the ancestral home of the Peoples Democratic Party (PDP), candidate, Mr Valentine Ozigbo.

Mrs Agnes Okoli, a septuagenarian, said that she got to the polling point as early as 7:30 a.m and had to wait till officials arrived.

Okoli said she was impressed with the peaceful manner everyone conducted themselves and expressed hope that it ended that way.

She said she was anxious to vote because it was her civic duty and that it was an opportunity for Amaesi to give Anambra their son as governor because one of the major candidates was from the community.

Nze Matthew Echeozor said he was at the venue when the officials arrived.

Echeozor said he was satisfied with the guidelines read out by the officials and urged the voters to adhere to them.

The Polling Official, who preferred anonymity, confirmed to voters that both the sensitive and non-sensitive materials including original result sheets were present.

The official said special attention would be given to the aged, persons with disabilities and pregnant women.

A combined team of Police and Nigeria Security and Civil Defence Corps (NSCDC) personnel was seen ensuring there was order.