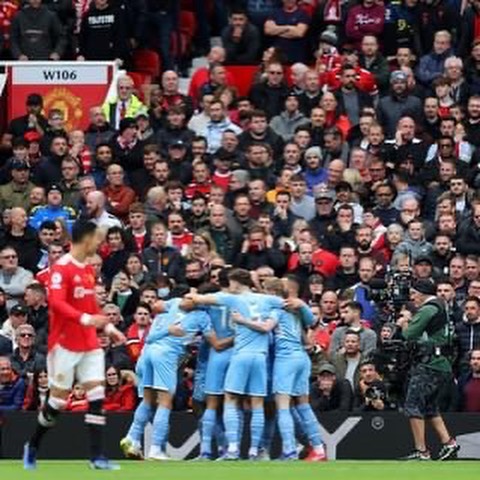 Manchester City produced a flawless performance in the 186th Manchester Derby, comfortably beating United 2-0 at Old Trafford to move up to second in the Premier League table.

Eric Bailly’s own goal gave City an early lead and Bernardo Silva’s backpost tap-in, which brought a 26-pass move to a conclusion, doubled City’s advantage just before half time.

The second half was a masterclass in possession football as City toyed with United to see the game out comfortably and earn a vital three points.

Manchester City started superbly and deservedly took the lead on eight minutes when Joao Cancelo’s dangerous cross was turned into the roof of his own net by Eric Bailly.

That sparked a period of near-total control from City, with Pep Guardiola’s side dominating the ball while United struggled to put together sustained passing moves.

United crafted their first chance after 25 minutes of play when Cristiano Ronaldo’s volley was saved superbly by Ederson.

It was a timely reminder of the City’s ability to pick sides apart when space is left behind.

De Gea was again the hero when he saved instinctively to stop Victor Lindelof from putting Phil Foden’s cross into his own net for what would have been a second United own goal before the United ‘keeper turned De Bruyne’s poked effort around the post.

City were playing with a real swagger and bit for the brilliance of the Spanish goalkeeper would have been out of sight with only a third of the game played.

Just before the break, City’s dominance was rewarded with a second after a wonderful sequence of passes.

Again, it was Cancelo’s ball that opened United up, with his right-footed delivery to the backpost tapped home from close range by Bernardo Silva – the perfect end to a fine 26-pass move that saw City in possession of the ball for one minute 38 seconds.

It was Bernardo’s third goal at Old Trafford for City.

With Jesus and Foden pinning back Luke Shaw and Aaron Wan-Bissaka, allowing City’s full-backs freedom to exploit, United made a tactical change at half-time, with Bailly making way for Jadon Sancho.

But it failed to spark United into life.

For much of the second period, City were almost toying with United, moving the ball around quickly and efficiently while the home side chasing shadows.

Foden flashed an effort wide when he looked certain to score as City once again cut through United’s defence, and John Stones failed to hit the target with his first-time effort on the turn.

Jesus was denied what looked like a clear penalty in the closing stages when he was clipped by Alex Telles, but the referee waved play on.

The scoreline perhaps doesn’t do City’s dominance justice but it was a brilliant performance and a vital three points.