Arsenal climb to 5th on table ahead of Man United 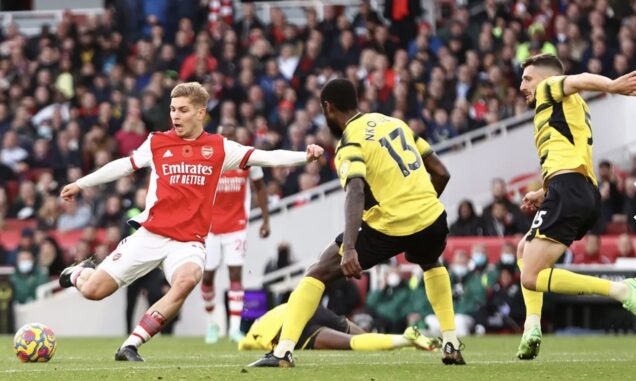 Arsenal bagged maximum three points at the Emirate on Sunday, after a 1-0 victory over visiting Watford.

Though the goal by Emile Smith Rowe in the 56th minute was controversial, it nonetheless took Arsenal to the 5th place on the table.

Arsenal are now three points ahead of Manchester United and one point away from fourth-placed West Ham.

The Arteta boys will go into the international break, sure that they will sit pretty in this position, for the next two weeks.

Arsenal dominated possession 61-39 and ought to have put the game beyond contention if Bukayo Saka’s goal effort in the 7th minute had not been ruled offside.

Then in the 36th minute, captain Pierre Emerick Aubameyang missed a penalty.

The team had 11 shots towards goal, to just four for Watford. They also had five blocked shots, to Watford’s three.

Arsenal’s winner came in the 56th minute, in controversial circumstances.

Watford’s Danny Rose kicked the ball out of play due to an injury to team-mate Ozan Tufan but Arsenal did not return possession back to them.

Alexandre Lacazette threw the ball to Takehiro Tomiyasu, who continued to play on despite Ismaila Sarr also going down.

And when Emile Smith Rowe found the bottom corner moments later Watford were up in arms, with Moussa Sissoko also complaining that Ainsley Maitland-Niles had committed a foul.

But referee Kevin Friend allowed the goal to stand and Arsenal maintained their brilliant run of form which has seen them go ten matches unbeaten.