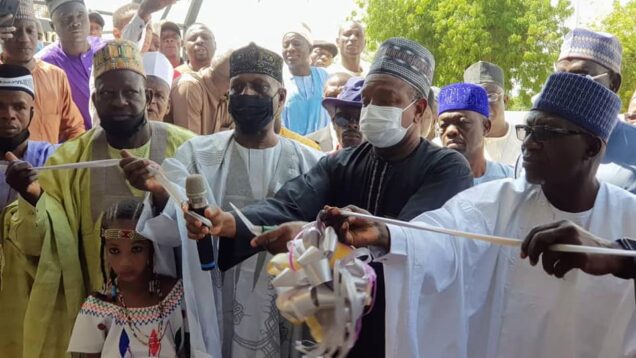 Kebbi state Gov. Alhaji Atiku Bagudu has reassured investors of his administration’s support to carry out their legitimate businesses in the state.

Bagudu gave the assurance on Saturday at the opening of the Nugget Continental Hotel and Tours in Birnin Kebbi.

“Kebbi state government welcomes investments that would lead to the creation of wealth and generate employment for the people of the state, especially the teeming unemployed youths.

“On behalf of myself and the state Government, we are praying to God to continue to bless the proprietor of the hotel, Alhaji Garba Ambursa; may God also bless what you have done today.

Bagudu also urged spirited individuals in the state to emulate Ambursa, assuring of the state government’s unwavering commitment to supporting the establishment of private businesses in Kebbi State.

“It is consistent with our view that the private sector should lead the development and the role of government is to help private sector make a profit.

“I can assure him that government will assist him in whatever way possible to ensure that he is richly rewarded,” he said.

The governor called on the proprietor of the hotel to also consider the sons and daughters of the state for employment in his hotel.

He said the state appreciated his corporate social responsibility projects in the state.

Earlier, the Chairman, Federal Road Safety Commission (FRSC), who is also the Chairman, Board of Directors of the hotel, Alhaji Buhari Bello, described the opening of the hotel as a great milestone and development for the people of the state.

” It is a good thing today we are here to witness the opening of the Nugget Continental Hotel Tours, a hotel of quality and industry in the state.

” I hope the services of the hotel would be extended to other major towns in the state, like Argungu, Yauri and Zuru, before expanding to others states, as they say charity begins at home’ Bello said.

In his remarks, Ambursa, expressed delight with the presence of the governor at the epoch-making event, saying that he would continue to collaborate with interested individuals to invest in the state.