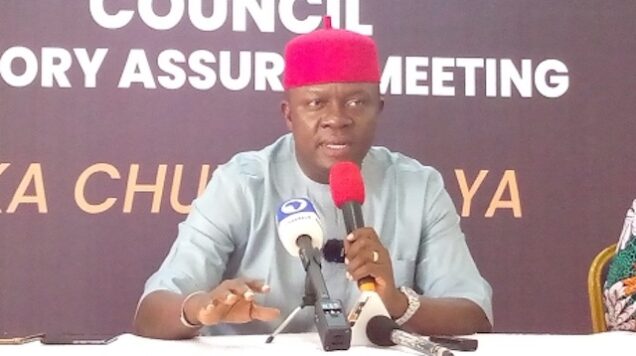 Mr Valentine Ozigbo, the governorship candidate of PDP: says the Nov. 6 Anambra election was fraught with lots of short-comings

Mr Valentine Ozigbo, the governorship candidate of the Peoples Democratic Party (PDP) in the just-concluded Anambra poll has faulted the election, saying that it was fraught with lots of short-comings on the part of various government institutions.

Nevertheless, Ozigbo said he has called the Governor-elect, Prof. Chukwuma Soludo to felicitate with him in a statement issued in Awka on Tuesday.

Ozigbo stated that he called Soludo on phone and wished him well.

On the shortcomings that characterized the election, Ozigbo listed absence of adequate security and conducive environment in parts of the state, which, according to him, led to election not holding in many places.

This, he said encouraged fraudulent practices.

“Denominational politics was also a factor.

“We need to do a lot more to ensure that competence is never sacrificed on this altar and that democracy is practiced in line with its truest tenets.

He expressed worry that most of the workers deployed by the Independent National Electoral Commission (INEC) for the poll could not operate the voting machines in many places.

“INEC failed woefully to provide logistical support for its workers and so, election started very late in many places, while it did not hold in many others.

“All of these led to the disenfranchisement of the greater percentage of voters and staining the course of democracy.

“I will be dedicating time to champion the positive change we need to ensure that future elections are truly free and fair and that the will of the electorate prevailed,” Ozigbo stated.

Ozigbo who said he called Prof. Chukwuma Soludo, congratulate him, wish him well and pray for his success also congratulated all the candidates in the election.

“We all have shown a determination to see that Anambra is better.

“It was an honour to run this race with you and congratulations again on your victory,” Ozigbo stated.

He further stated that he decided to go into active politics two years ago with the objective of “setting an example of excellence in governance and unifying Anambra and the Igbo people around a shared vision of greatness”.

He expressed his determination to always hold the in-coming government accountable “to ensure that the people’s wellbeing is foremost in its actions at all times”.

Ozigbo, who finished second in the poll, urged more Anambra professionals to go into politics to be able to contribute toward building a prosperous state.

“Pulled by the vision for a better and brighter Anambra, we set out on the quest for the governorship.

“We were resolute on taking revolutionary steps to address the decay and decline in security, infrastructure, education, healthcare, the environment and other social systems meant to serve the people,” he stated.

He thanked the PDP leadership and his supporters for their support and contributions to his aspiration.

He said his “Ka Anambra Chawapu” (that Anambra may shine) message had permeated the consciousness of the people and the nation at large, hoping it would stick for a long time.

“I urge them to keep the faith, don’t ever let the candle that has been lit in you dim, the country needs your active participation in its affairs.

“I thank all the courageous men and women who believed in me, many of them without knowing me well.

“You are the heroes of our Ka Anambra Chawapu Movement.

“I am grateful to every single person who joined our movement and contributed in one way or another,” Ozigbo said.