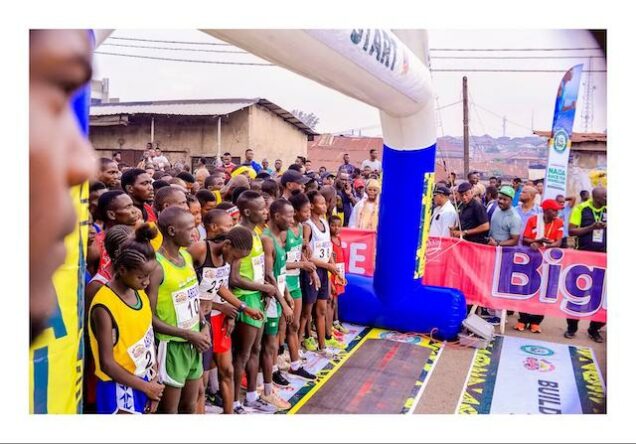 The runners at the Bigi Abeokuta 10km race

Cross River’s Ismael Sadio has emerged as the champion of the Bigi Abeokuta Marathon race held on Saturday, Nov 13, 2021.

In the women’s race, Plateau runners took the prime positions as Rose Akusho, with 36: 33: 30, once again won, thus completing a record three wins in Nigerian marathons.

The winner of the 10km race, Sadio, a first-time winner in any organised marathon, said that it was a dream come true, as he had to relocate from Calabar to Plateau to prepare for the race.

“For me, having any chance at winning any marathon and dislodge the Plateau runners involved sacrifice as I had to relocate to Plateau to run along with the indigenes.

“This is a huge honour for me because I can see the reward for my sacrifice,” he said.

For Akusho, the winner of the female race, it is a familiar terrain for her as she had been running since she was just 11 years old.

Akusho told NAN that she would continue to run marathon races till she hits the biggest stage in the Olympics.

“Thank God, I am able to win today, but this is not my target; I have other marathon races ahead which I need to prepare for.

“I am targeting the Olympics; maybe I can win medals for Nigeria,” she said.

NAN reports that the high point of the game was the children runners who also made it to the podium and were rewarded with trips to Kenya to be sponsored by the Commissioner for Local Government and Chieftaincy Affairs, Mr Afolabi Afuape.

Afuape, in a brief remark, lauded the kid runners for their bravery in competing with the older runners, adding that he would borrow a leaf from the notable marathon winning countries to support them.

“I think it is high time Nigeria started to borrow a leaf from the achievements of the Kenyans and the Ethiopians in their developmental agenda for their marathoners.

“They usually catch them young and nurture them which I will also like to copy by sponsoring these kids to Kenya to understudy the runners. The sponsorships will be fully funded me,” he said.

The Secretary to the Ogun Government, Tokunbo Alabi, also announced a cash reward of N500,000 for the wheelchair runners.

The prizes for the race include 2,000 dollars for the overall winner, while the first and second runner-up will receive 1,500 dollars and 1,000 dollars respectively.