Adeboye to Ortom: You will always overcome your enemies 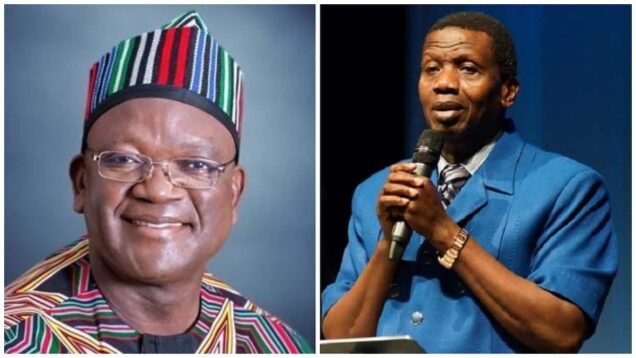 Adeboye Spoke at the 25th Special Anniversary Service of the Dunamis International Gospel Centre Combined Service, Glory Dome, Abuja on Sunday.
Ortom has been having a running battle with herdsmen and the Federal Government over incessant invasion of his territory.

The governor was at the Glory Dome for the special service when Adeboye delivered his sermon.

According to Adeboye, he is proud of Ortom as his son, saying that the church is constantly praying for him and that the enemy would not prevail against him no matter how they tried.

“Don’t worry, the sermon of a mathematician will not be long. So my service will not be long but I mustn’t forget to say to my Governor (Ortom), my son, that we are proud of you.

“We are very proud of you and I want you to know that we are constantly praying for you. It doesn’t matter what the enemy may try, you will keep on succeeding. So shall it be in Jesus’ name,” he said.