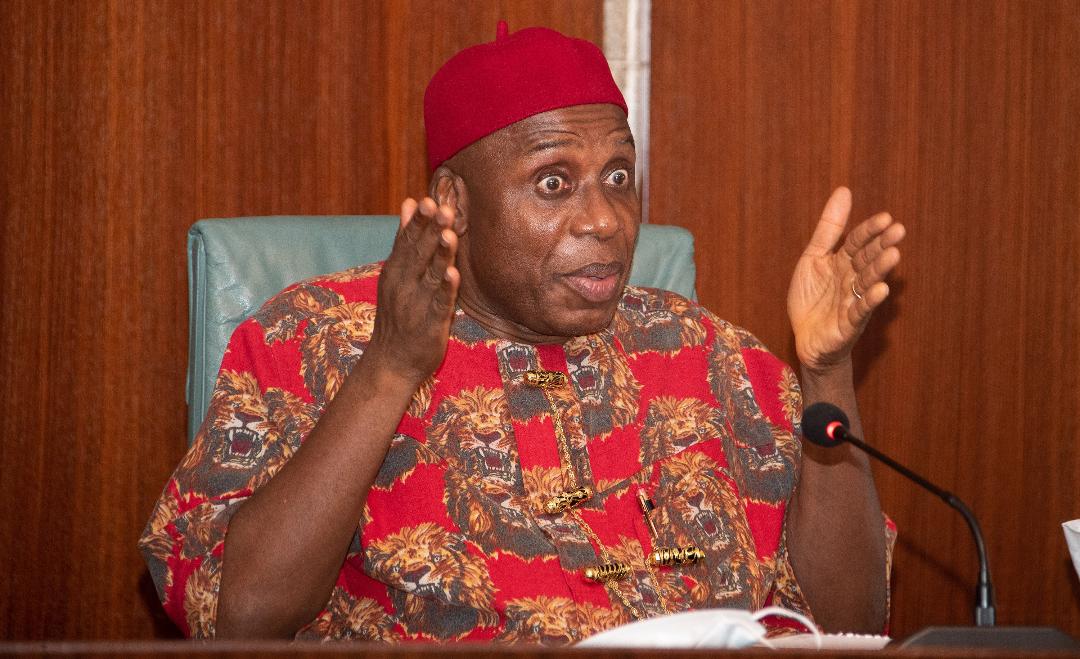 The Minister of Transportation, Chibuike Rotimi Amaechi, has said defection of Dr Nnamdi Azikwe, Nigeria’s first President from the defunct Biafra Republic in August 1968 helped weaken the agitation of the secessionists.

The late Odumegwu Ojukwu had on May 30, 1967 declared that the eastern region is breaking away from Nigeria as the Republic of Biafra.

The declaration however resulted in a war between soldiers of the Nigerian government and Biafra secessionists, otherwise called the Nigerian civil war.

The civil war ended in 1970 after the secessionist surrendered and returned to be part of Nigeria.

The late Nnamdi Azikiwe had declared support for bid by the Igbo, his kinsmen, to breakaway from Nigeria into an independent Republic of Biafra in 1967, but backed out a year later.

Zik, as he was popularly known later to begin the campaign for ‘one Nigeria,’ calling on Biafra agitators to abandon their bid to break way from Nigeria.

Reminiscing on that episode on Wednesday,at the 2nd Igbo Nsukka Zik Annual Merit Award, organised by Igbo Nsukka United Front (INUF) with the theme: “Preserving Zik’s Legacies for National Unity,” on Wenesday, Amaechi said, “Zik’s defection from Biafra in August 1968 (about a year after the civil war broke out) was the one decision that many of his kinsmen, including some people here never really forgave him.

But he noted that: “It was a move that weakened the case for secession and may have hastened the collapse of the Biafran resistance. For a significant number of Igbo people, it was unpardonable, but Zik was clear on what his motivations were.

Amaechi, former Governor of Rivers State, also highlighted the various efforts and contributions of Zik in the country’s political evolution and his demonstration of unalloyed commitment to the oneness, indivisibility and indissolubility of Nigeria.

Represented by a former parliamentarian and chieftain of All Progressives Congress (APC), Senator Nurudeen Abatemi-Usman, the Transportation Minister, said: “Even in Biafra, Zik was consistent on his quest for national unity and pushed relentlessly for compromise and diplomatic solutions to the problems at hand.

He added that Nigeria’s first President and foremost nationalist, late Dr. Nnamdi Azikiwe, widely referred to as ‘The Great Zik of Africa’, was a consistent promoter and relentless advocate of national unity.

“It is not an easy place to be when everyone around you is obsessed with tribe and self but it requires exemplary courage and clear-eyed commitment to national unity to stay the course.

“Nigerian politicians must jettison blind loyalty to tribe and self for Nigeria to live up to its potentials. Zik’s legacies must therefore be put forward as a template for courageous leadership with the unity of Nigeria as the focal point.”

He noted that the late Azikiwe “took critical decisions between 1959 and 1969 that established him in the pantheon of statesmen.

In his welcome speech, the Director General of INUF, Hon. Chineme Onyeke, said “Igbo Nsukka Zik Annual Merit Award Summit which we organise every year is to honour Dr. Nnamdi Azikiwe for his efforts in putting Nsukka in the global map, mostly by siting the first indigenous University of Nigeria in Nsukka land which therefore serves as a catalyst, not only for intellectual development of our people but also for the economic, political and social development of the Nsukka nation. Two, Zik lived all his life and died in Nsukka.

“Zik Annual Merit Award is an occasion in which we appreciate and honour patriotic Nigerians who have in one way or the other helped Nigeria nation in the areas of policy formulation, investments, capital development and youth empowerment.

“Therefore our Group, in seeking to emulate Dr. Nnamdi Azikiwe and other patriotic Nigerians fixed the 16th of every year, marking Zik’s posthumous birthday, to host an Economic/Award Summit wherein we invite government officials, investors, captains of industry and policy makers to seek ways of collaboration to invest in Nsukka area in particular and other parts of Nigeria in order to gainfully engage the teaming unemployed youths.

“As part of our Action-Plan, and in order to further internalize the philosophy of One United Nigeria which Zik epitomized in life and death, we intend to build here in Abuja a Unity Institute in the name of Zik. The institute is to be called and named ZIK INSTITUTE FOR NATIONAL UNITY. This institute when completed will serve as centre for National Dialogue and research for all Nigerians, institutions of learning, Civil Society Groups, Non Governmental Organisations, students and the general public.”