Love in time of dementia: How Joke Silva has handled Olu Jacobs' illness 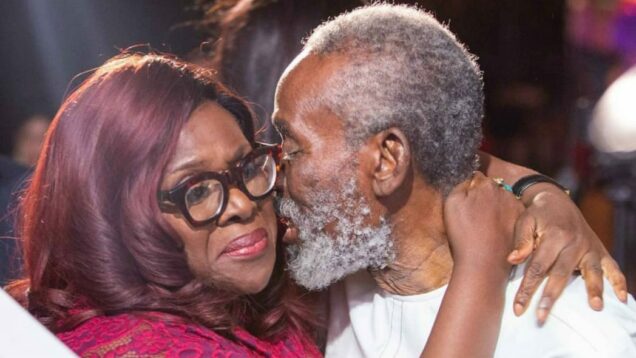 Joke Silva and Olu Jacobs at a recent outing

Of course death was not in the offing but life, a celebration of life as she had just clocked 60 years and 40 years in the entertainment industry.

And immediately we were ushered into the living room, strutting like Arabian princes with panache, there Joke sat with her husband, wile a Yoruba movie on African magic, was entertaining on a wall mounted plasma TV.

Once in a while, her husband of more than three decades would nod his head in response to some captivating scenes in the movie. Of course, he is an actor and knows a good act when he sees one.

Though he was looking frail, with grey beards straggling over his lean face like a Biblical prophet, he showed no sign of someone the media had alleged had died several times.

“Sir J, are you good?,” Joke asked repeatedly, her attention riveted on him, with love writ large in her eyes, love of more than 30 years. And he would nod his head and hum a yes.

A yes? This indeed sums up the love life of Joke Silva and Olu Jacobs, two seasoned Nollywood actors who met and fell in love with each other on stage while rehearsing Professor Wole Soyinka’s Jero’s metamorphosis at the National Theatre Iganmu, Lagos.

It sums up the enduring strength and courage the couple have displayed, even in very trying times, even when everywhere seems bleak and grim.

This indeed sums up how Silva had handled her husband’s degenerative disease with love laced with stoicism. Even though she has been sorely pained by what her husband was going through, she has never showed it or given up.

Silva has just revealed in an interview with Chude Jideonwo that her husband is suffering from dementia with Lewy bodies, a degenerative disease.

She expressed that it had been hard on her husband because he did not understand what was going on and it had been tough also for the family members.

“We have gone through it over the past couple of years but we thank God.

“We have gone through some times and situations recently that I wish I had the old you here so I don’t battle these times on my own but we are grateful for the moment of clarity. I miss the times we worked together.”

Even when the media falsely reported that her husband was dead several times, Silva came in his defence and debunked the rumour, saying he was hale and hearty. She had to protect his image from prying eyes.

“Don’t mind them, they’re just talking rubbish; don’t disturb your head. He is in the living room right now about to have Eba and Ogbono soup. Let them keep deceiving themselves. He is hale and hearty.”

To buttress her points, Joke Silva took to Instagram to warn rumour mongers to desist from such callous act or face legal action.

“Good day good people. Trust you all are good? This is just to inform you that Sir J (Olu Jacobs MFR), as we fondly call him is alive and enjoying his singing lessons. He wants to add dancing but I have advised he wait a bit. So, to all those carrying false rumours, remember it is a criminal offence. Desist or legal action will be taken.”

And days after the rumour made the rounds, Joke stepped out with him to receive the lifetime achievement award at the Afriff Global Award which held in Lagos. One can see her attempts not only to stand with her husband but also to prevent him from being turned into a fodder for gossips.

That was not the only time Jacobs had stepped out. Rather than resign themselves to fate, the couple made sure they stepped out, even at the risk of eliciting criticisms from those who said her husband wasn’t looking healthy enough.

For her to have protected her husband for a long time, even when many wanted her to betray him, for her to be there for him at a time like he needs all the help he can get from her is worthy of commendation.

Not even dementia nor criticisms, not even rumours of death can undermine the love Silva has for her husband or separate their marital bond. .