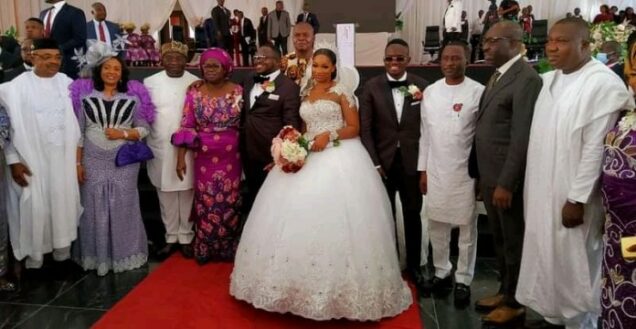 The couple with some of the dignitaries

The ceremony was conducted by the Seventh-Day Adventist Church at the International Conference Center, Umuahia.

Buhari, who was represented by Dr Uche Ogah, the Minister for State for Mines and Steel, advised the couple to make God the bedrock of their marriage by praying together.

He urged the couple to uphold family values in their efforts to build a solid home and become a blessing to their generation.

Buhari prayed God to make the new union to be blissful and a huge success to serve as a model for young people to imitate.

Also, Nigeria’s First Lady, Mrs Aisha Buhari, said that the event was a reminder that marriage remained a union that ought to be celebrated with love.

Mrs Buhari, who was represented by Mrs Ogonnia Umahi, Wife of the Governor of Ebonyi, prayed God to bless the couple with love and understanding.

The Chairman of the event, Gov. Emmanuel Udom of Akwa Ibom, said that the event was a clear indication that the couple is highly favoured.

Udom said that the union would yield fruits that would be a blessing to the couple and their family.

Earlier, Ikpeazu described the occasion as a special event as it had given him the opportunity to witness his son’s move into a new phase of life.

The governor thanked the guests present at the event, noting that their presence added colour to the wedding.

He added that the outpouring love from them was overwhelming.

He said that their show of love would inspire the couple to make conscious efforts in making a success out of their marriage.