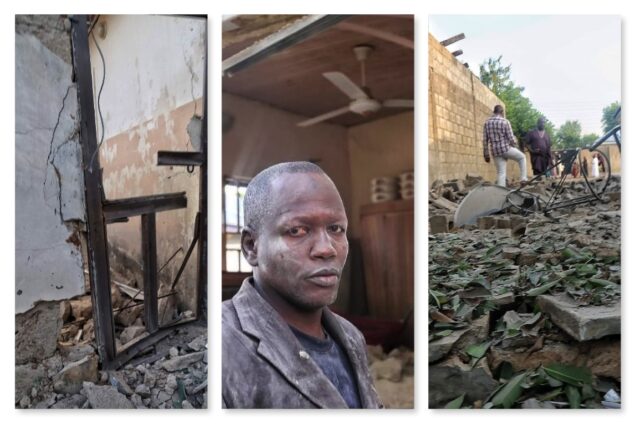 Aftermath of ISWAP rocket attack on Maiduguri on Saturday

The first two explosions occurred at Gomari, near the air force base.

The third bomb landed in a building at one thousand housing estate near Hajj Transit Camp, where the repentant Boko Haram insurgents are being housed.

“I heard the first explosion early in the morning and then the second one, then I came out to see where it was happening before the third one landed in our estate.

“I saw when it landed and I immediately laid on the ground. The moment it landed in the house, the whole place became dark with dust”, a witness said.

The attack, according to PRNigeria, was launched by ISWAP terrorists from Duwari, a village close to Maiduguri.

Several houses were said to have been destroyed, while many residents scamper for safety.

A staff of an emergency agency said casualty couldn’t be determined due to sanitation exercise.

“The number of casualties is yet to be confirmed because there is an ongoing sanitation exercise this Saturday morning. Many people stay at home,” he said.