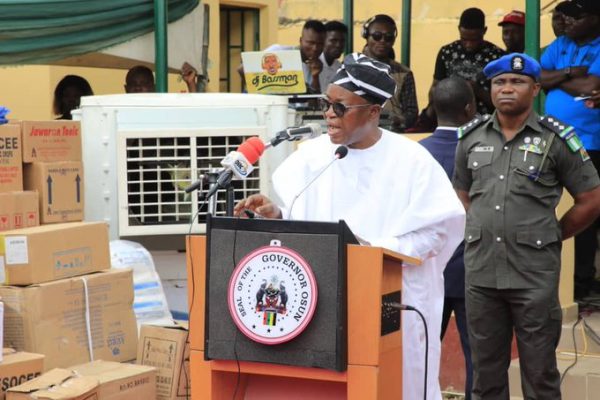 Oyetola was presented with the award at a ceremony on Monday night, attended by prominent Nigerians, including former Vice President Atiku Abubakar.

Presenting the award, Mr Steve Omojafor, a former Chairman of Zenith Bank, said that Oyetola, also a UNILAG alumnus had to contend with so many obstacles on his way to becoming Osun governor.

“Today, we are honouring Nigerians who have contributed immensely to the country’s development in one way or the other,” he said.

He lauded Oyetola’s achievements in office, adding that he had made UNILAG alumnus proud by what he had brought to bear in Osun in terms of fiscal discipline and good governance.

According to him, the Osun governor was given the award because of his outstanding performance and achievements, especially in the area of citizens’ welfare.

Receiving the award, Oyetola described it as an endorsement of the current All Progressives Congress (APC) led administration in Osun under his leadership.

The governor assured that he would continue to live up to its billing as a responsive and responsible administration.

“In Osun, the people are at the heart of what we do, our workers for example get their salaries in full as and when due.

“We may not be that buoyant, but we pay minimum wage. We pay pensions and gratuities regularly just as we are paying the arrears we inherited.

“I have restored the car loan scheme to our workers and they also enjoy our intervention in the sector among other welfare packages.

“Through the Osun Insurance Health Scheme, our workers contribute just 1.5 per cent of their basic salaries, while the government pays 3 per cent, making it 4.5 per cent as a premium to enjoy quality healthcare services,” Oyetola said.

“We enrolled the vulnerable, including the aged and people living with disabilities into the Osun Health Insurance Scheme at a free premium to enable them to enjoy quality healthcare services.

“Over 30,000 vulnerable persons are fed on a monthly basis through the Osun Food Support Scheme. We will soon be rolling out other specific support programmes for the elderly and widows before the end of 2021.

“We have provided loans and credit facilities to our people, including women and youths, so far, over 18, 000 Osun youths have been empowered through various schemes,” Oyetola said.

This, he said, included loan disbursement to enable youths and others in the state to start new businesses and boost existing ones.

Also, that the government inaugurated 350 Amotekun Corps and recruited 750 vigilantes, including hunters across all Local Government Areas (LGAs) of the state to further enhance the security of lives and property.

Thereafter, he commended DAAR Communications for the award and dedicated it to the people of Osun.