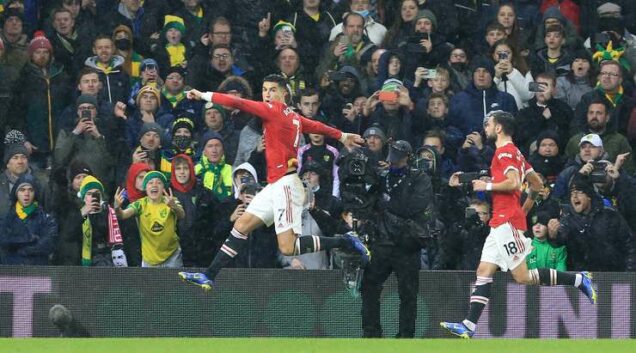 Ronaldo was brought down on 75th and the referee pointed to the penalty spot to give United a lifeline.

The United striker stepped up, ran up to the ball, stopped and waited for Tim Krul to move before slotting the penalty into the left of the goal.

Norwich controlled the match and deserved to have scored some goals but United’s goalkeeper, David de Gea thwarted their efforts.

On 78 minutes, Ozan Kabak shook off the attention of a defender and from mid-range let fly towards the left side of the goal, but David de Gea was well positioned to make a comfortable save.

Three minutes later, Billy Gilmour gathered a nice lofted pass just outside the box and attempted to put the ball into the middle of the goal, but his shot was deflected away by one of the defending players.

On added time, Kabak connected with the ball in the six-yard box after the resulting free kick and shot towards the bottom right corner, but David de Gea made a magnificent save.