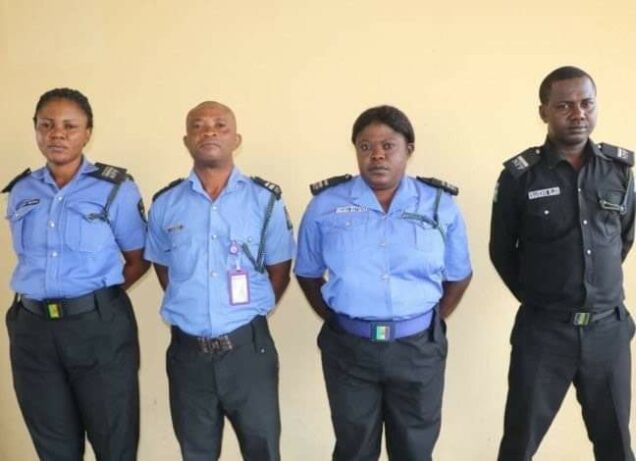 The four police officers arrested for extortion on the order of Mr Babaji Sunday, the Commissioner of Police, FCT .

Mr Babaji Sunday, the Commissioner of Police (CP) in charge of the Federal Capital Territory (FCT), has ordered the immediate arrest and investigation of four police officers over alleged extortion.

The Police Public Relations Officer (PPRO) in the FCT, ASP Josephine Adeh, disclosed this in a statement on Wednesday in Abuja.

She said the order followed a viral extortion video, circulating in the social media, where the officers on traffic duty along Area 11, intercepted and extorted money from a man whose identity had not been identified.

Adeh said the officers had been taken into custody for investigation, with a view to unraveling facts surrounding the situation.

“The Police wish to call on anyone who has a way of reaching out to the young man in the video to avail the Command with his contact details or to relay a message of invitation to the Public Relations Office of the Command.

“The CP received the news with grave bewilderment and described the attitude of the officers as a discreditable conduct, an act unbecoming of Police Officers and a total deviation from the core values of uprightness expected of Police officer.

“The CP also stated that the act is unacceptable and will not be condoned in the command as hesitation will not be made in the administration of a commensurate disciplinary action,” she said.

She pledged the commitment of the command to ensure that FCT residents are served in line with global best practices.

Adeh urged residents to reach the Public Complaints Bureau on 0902 222 2352 to report any unprofessional conduct of Police officers while discharging their duties.

Watch the video as shared by Sahara Reporters;