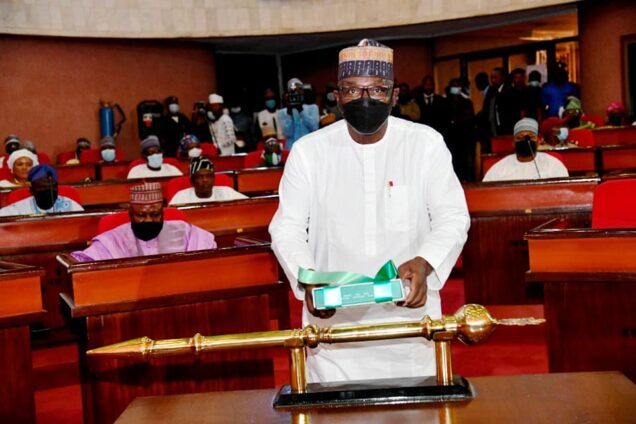 Presenting the budget on Wednesday, the governor said capital expenditure would gulp 55.3 per cent of the fiscal plan, while 44.7 per cent would go for recurrent expenditure.

AbdulRazaq added that the 2022 budget was 12.5 per cent bigger than the revised budget of 2021, and would focus on completing ongoing projects and initiating new ones in the year.

“The 2022 budget proposal we are presenting today has been designed to sustain the tempo of this phenomenal growth we have recorded.

“It is therefore called Budget of Sustained Reformation for Inclusive Growth. Furthermore, the size of the fiscal plan is N189,494,692,524, representing a 12.15 per cent increase over the 2021 revised budget.

“It has 44.7 per cent recurrent component, with provisions for payment of consequential adjustment of the minimum wage.

“With 55.3 per cent capital expenditure, the objective is to fund ongoing projects and initiate new ones as resources permit.

“The budget is built on the assumptions of oil price of 57 US Dollars per barrel; daily oil production estimate of 1.88 million barrels/day; exchange rate of N410 per US Dollar; and GDP growth projected at 4.20 per cent and inflation closing at 13 per cent.

“Funding windows include the traditional sources of federal allocation, Internally Generated Revenue (IGR), the bond already accessed, and the bridge financing of the Federal Government,” he said.

“I am presenting to this Honourable House a fiscal document which points to the next phase of our service to the people of Kwara State,”.

“Over this period of time, we have delivered on our many electoral promises to restore the glory of Kwara State in basic education, basic healthcare, provision of potable water, and extending development to the hinterlands,” he said.

According to him, the government has been supporting smallholding and commercial agriculture, mainstreaming gender inclusion for sustainable growth, youths empowerment, easing the business climate, ensuring social mobility through equitable wealth distribution and employment opportunities, among others.

“Our efforts are paying off as various data sets have shown. Of special note is how much we have done in retooling the local economy and deepening financial inclusion for the poor.

“In a recent survey, Kwara came first nationwide in enabling business environment index, second in the perception of opportunities index, third in business performance index, and fourth in State Entrepreneurial Index,” he added.

Meanwhile, the governor listed some ongoing projects of the administration to include the Innovation Hub, Visual Arts Centre, Osi-Obbo Road, Garment Factory, Ilesha-Gwanara Road, and new Dental and Eye facilities at the Ilorin General Hospital.

AbdulRazaq said the projects were part of his administration’s strategic efforts to place Kwara among the most vibrant states in Nigeria.