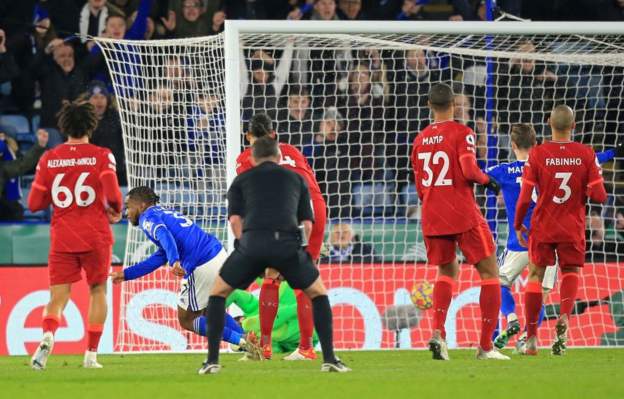 Nigeria’s Ademola Lookman came on from the bench to score a superb goal as Leicester City stun Liverpool in a premier league game on Tuesday.

Lookman, who came on to the pitch on 56 minutes scored the only goal of the match on 59 minutes.

Kiernan Dewsbury-Hall slipped a clever pass through to Lookman, who moved inside the box and sent a measured shot beyond the keeper and into the left side of the goal.

Liverpool were paying for Mo Salah’s failure to score a penalty awarded to them by the referee on 14 minutes of the game.

Wilfred Ndidi was trying to get to the ball but clattered into the legs of Salah.

Michael Oliver blew his whistle for an infringement and awarded the visitors a penalty kick.

Mohamed Salah failed to beat the goalkeeper from the penalty spot with a shot inside the left post. Kasper Schmeichel anticipated his intention perfectly and leapt to stop his effort.

The defeat was a setback for Liverpool as fierce rival, Manchester City have opened six points gap at the top of the premier league table.