What happened to 22 newly promoted Brigadier Generals in Maiduguri 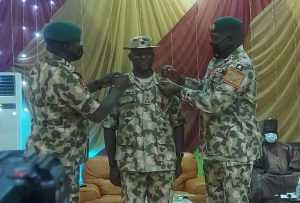 Theatre Commander and Commander Multinational Joint Task Force decorating one of the newly promoted Brigadier Generals at the ceremony in Maiduguri on Tuesday.

Among those decorated with their new rank of Brigadier General is Ado Isa, the Deputy Director, Public Relations 7 Division/Joint Task Force (Northeast) of Operation Hadin Kai.

Speaking at the ceremony, Musa said among those promoted is a Navy Captain elevated to Navy Commodore, and a Major to Lieutenant Colonel in the theatre.

According to Musa, the mass promotion of such high number of generals was the first of its kind in the history of the theatre.

“Today, we are witnessing yet another historic occasion of the investiture of new Brigadier Generals; it is the first time in the history of Army that we are having such number of newly promoted generals in a single promotion within the theatre.

“As you are been decorated with your new rank, much is expected from you, as new rank comes with additional responsibilities,” Musa added.

While commending the wives of the newly promoted senior officers for keeping the home front, the theatre commander expressed optimism for redouble effort for an end to the insurgency so that the military could go to barracks and meet their families.

In his remarks, Gov. Babagana Zulum, who was represented by the State Attorney-General and Commissioner for Justice, Mr Kaka-Shehu Lawan, congratulated the newly promoted and urged them to remain committed to their assigned tasks.

Zulum said the Government of Borno regards the military in high esteem for their sacrifice in the fight against insurgency.

“For the newly promoted generals, I urge you to do more, because this promotion was as a result of your hardwork, dedication, commitment and above all loyalty, you should do more to justify your new ranks,” Zulum charged.

Also speaking at the ceremony, the Force Commander, Multinational Joint Task Force (MNJTF), Maj.-Gen Abdul Khalifa, tasked the newly promoted to take it as a challenge, particularly at this critical moment of the nation.

“Your new ranks come with more responsibility, and your new rank came at a challenging moment of our nation. We rely on you to do whatever you can do to end this war,” Ibrahim said.

Speaking on behalf of the newly promoted, Navy Commodore Paul Nimyel, thanked Mr President and Commander in Chief and the military authority for finding them worthy of the promotion, promising to put more efforts to end the over decade long insurgency.