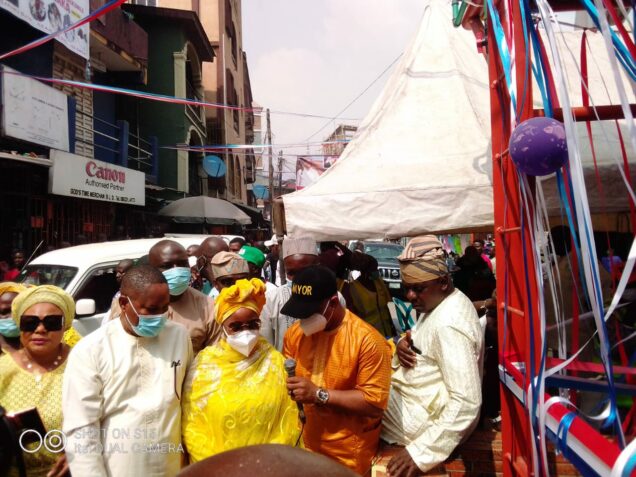 Iyalode of Lagos, Bintu Fatima Tinubu, on Friday, commissioned a borehole donated to the Oritafaji community in Lagos Island.

Speaking at the event which took place at Aroloya street, Tinubu, who doubles as the President of Fatima Charity Foundation, thanked God and everyone who made the project a success.

She said it made her highly excited that the Fatima Charity Foundation, could launch a project that will ease the stress of the community on the last day of the year 2021.

Tinubu said: “I am so happy today and I want to thank God for this idea. This project makes everyone happy and I’m happy that the project marks the end of 2021.”

She said: “I called Deputy Speaker to let him know I want this project in Lagos Island and in 30 minutes, he called back and gave me all the details needed. Everyone made the job so easy that the project was completed in two weeks. I’m so grateful to God and the people of the community as well for cooperating with officials on the field.”

Speaking at the event, Hon. Sanni thanked Fatima Tinubu for paying attention to the needs of the people of Lagos Island.

He said: “I was surprised when mama called me that she wants to do a project in our community. At her age, we ought to be given her but she still wants to help without making noise about it.

“We are so encouraged by her actions. She never gets tired of giving and we are grateful for this project.

“The beauty of this project is that it will serve 3 wards connected to Oritafaaji. It is a strategic project which will make water more easily accessible for the people.”

Sani, however, concluded by appreciating everyone who contributed to the success of the project.

Hon. Moshood Mayegun, Deputy Chairman of APC, Lagos Chapter, on his part, said Fatima Tinubu had restored the days where water provided by the government was made easily available.

He said: “I can vividly recall that this area had a government water facility when we were growing up and this has now been restored by Fatima Tinubu. What she has done today is just the tip of the iceberg, I have seen her done more and she will also do more in this area.”

Alhaji Dosu Fashola, a chieftain of the All Progressives Congress, on his part, called on the people of the community to properly maintain the borehole.

He reiterated that without proper maintenance, other well-meaning Nigerians will not be willing to come to develop the community in the future.

However, residents of the Oritafaji community who came out en masse expressed their appreciation to Fatima Tinubu.

The residents said the solar-powered borehole, with four wash stations, was a welcome development and promised to ensure it is properly maintained.