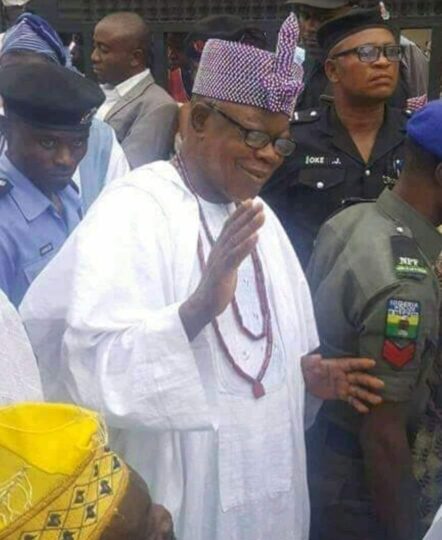 The Correspondent, who monitored the development on Sunday afternoon in Ibadan, reports that the two compounds had started playing host to visitors, shortly after the news of the demise of the current Olubadan, Oba Saliu Adetunji, was announced.

At the Aliiwo Family Compound of Chief Balogun, NAN reports that traditional drummers were seen singing songs of praises for the incoming Olubadan to the admiration of family members and well-wishers.

Watch the video from the Aliiwo Family Compound of Chief Balogun below:

Also, at the residence of Chief Balogun, a former Senator, at Alarere, near Iwo Road interchange Ibadan, community heads, family members and other well-wishers were seen in large numbers waiting to meet the incoming Olubadan.

Few of the visitors were, however, allowed to meet Balogun in his private room, while others were disallowed by security personnel guarding the house.

Some of the family members who spoke with NAN expressed joy for making it possible for their family to producing another Olubadan after long years of waiting.

One of the family members, Mukaila Adebisi, said the last time Aliiwo Compound produced Oba Memudu as Olubadan, was in 1952.

The Leader of the group, Dr. Abdul-Azeez Adediran, popularly known as ‘Jandor’ in a statement, expressed his heartfelt condolences to Gov. Seyi Makinde of Oyo State and the people of the state on the demise of the first-class paramount ruler.

Adediran said that the departed oba lived a substantial part of his life serving the good people of Ibadan, Yorubaland, Oodua race, Nigeria, and humanity in general.

“As a businessman, Ibadan traditional chief, Yoruba leader of thought and finally as the revered King of Ibadan, which remains a pride of Yorubaland, Oba Adetunji was exemplary.

“The oba distinctly raised the bar of good leadership among his subjects,” he said.

While commiserating with the Governor, the immediate family of the late traditional ruler, and the Olubadan-in-Council, Adediran said that history beckons on Makinde as Governor of the state as he would be superintending the coronation of the next Olubadan.

“On behalf of the Lagos4Lagos Movement, I wish to express our heartfelt condolence to the people of Oyo State, especially the people of Ibadan over the death of this highly respected monarch,” Adediran said.

The 93-years-old Oba Adetunji, who ascended the throne in March 2016, was said to have died early hours of Sunday at the University College Hospital (UCH) in Ibadan, Oyo state.

Olubadan’s death brought to four, the numbers of prominent Yoruba traditional rulers that had joined their ancestors in the last three weeks.

The late Oba Adetunji was the 41st Olubadan of Ibadan, following his coronation on March 4, 2016.