Rinu Oduala bags Woman of the Year Awards in Advocacy 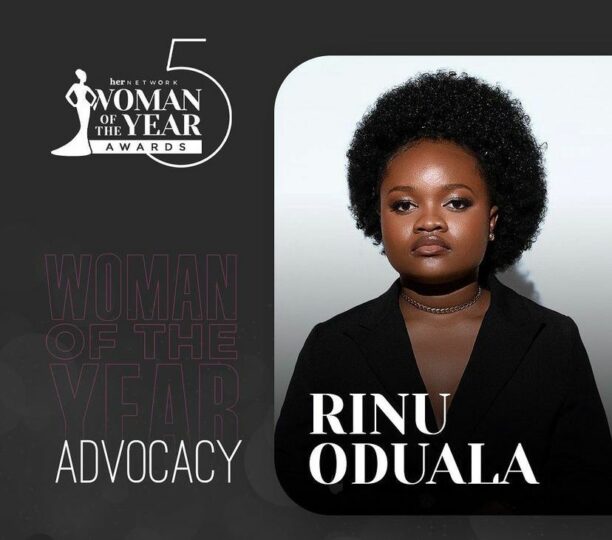 Social media influencer and popular #EndSARS campaigner Oduala Olorunrinu, popularly known as Rinu has been awarded as Woman of the Year, in Advocacy 2021.

She won the award from Her Network Woman of the Year awards, an occasion to honour amazing women who have made a big impact in their career, community, or network.

The fifth annual Her Network Woman of the Year Awards took place on Wednesday, December 29, at the Oriental Hotel in Lagos.

Rinu was also nominated for Africa’s Top Celebrity Promotion of Justice and Social Good 2021 by SERAS and has been named by YNaija as one of 100 Most Powerful Young Nigerians, in 2021.

Rinu had participated in the #EndSARS protest against police brutality in Nigeria and was selected as one of the representatives in the Judicial Panel of Inquiry and Restitution for Victims of SARS Related Abuses & Lekki Toll Gate shooting that took place on the 20th of October 2020.

Rinu later pulled out of the panel, saying it is obvious that the government is only out to use youth representatives for performative actions.

#EndSARS was not the first time, Rinu will get entangled in public affairs.

She was the convener of Operation Sanitise movement during the heat of the pandemic, sharing hand sanitizers to Nigerians.

She also joined the protest against rape, after the murder of UNIBEN student, Uwavera Omozuwa and Lagos lady, Tina Ezekwe.