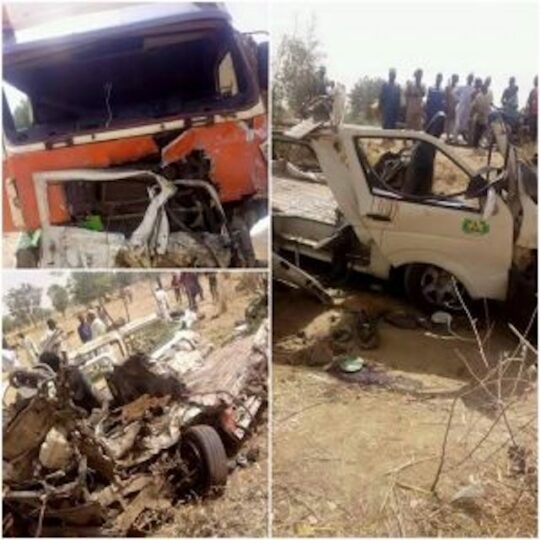 The vehicles involved in the Bauchi accident

The Federal Road Safety Corps (FRSC) in Bauchi has confirmed that three members of the vigilante died in an accident on Misau-Azare highway on Saturday.

The vigilantes were heading to Azare to help maintain law and order at the wedding of the daughter of Minister for Education, Malam Adamu Adamu.

The Sector Commander, Mr Yusuf Abdullahi, who disclosed this on Sunday in Bauchi, said seven others sustained various injuries.

Abdullahi said that the accident occurred at Zadawa village around 10:30 a.m on Saturday.

He said that it took personnel of the Corps about fifteen minutes to arrive at the scene to clear the site.

“The accident involved 10 members of the vigilante while travelling to Azare, headquarters of Katagum Local Government Area, to attend the wedding of the daughter of Minister for Education, Malam Adamu Adamu.

“Three male adults lost their lives while seven others sustained injuries. However, they were not in the governor’s motorcade.

“They went earlier before the governor and you know whenever there is a function, they always go to assist in maintaining law and order.

“One person died on the spot while two others passed later at the Federal Medical Center (FMC), Azare,” he said.

According to him, those injured are currently receiving treatment at the hospital, adding that the corpses had been deposited at the morgue of the same hospital.

Meanwhile, one person lost his life in a separate road accident on Saturday around Ramadan Press, along Bypass road in Bauchi metropolis.

Abdullahi said that the accident occurred when a Sharon bus tried to avoid colliding with a Honda Civic car.

He said that the bus skidded and crashed.

“Before we got to the scene, the Motor Transport Department of the Police Command conducted the rescue operation exercise,” he said.