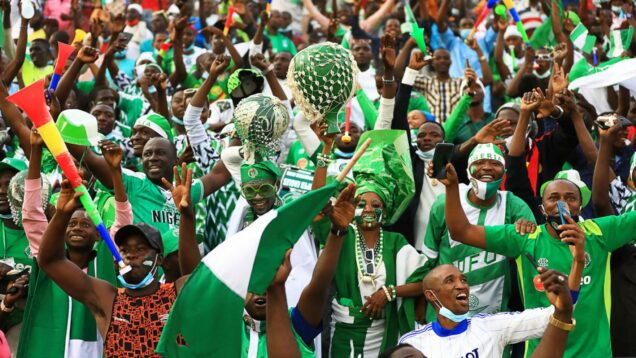 The Nigeria Football Supporters Club (NFSC) and some journalists have relayed their experiences travelling by road and water from Nigeria to Cameroon for the on-going 2021 Africa Cup of Nations (AFCON).

The News Agency of Nigeria (NAN) reports that most of the Nigerian contingent to the biennial championship travelled by road to the host country, Cameroon due to its proximity.

The contingent included members of the NFSC and journalists, some of whom told NAN in telephone interviews that they were given a good reception by the Cameroonians.

The president of NFSC, Sam Ikpea, said although it was not the first the Supporters Club travelled by road with over 300 members, he regarded the trip as part of tourism experience for the club.

“This is not our first time travelling by road to neighbouring countries to support the national team. However, the road trip to Cameroon was a nice experience for everyone.

“We departed by road from Lagos to Abuja, then to Bauchi where we connected Yola in Adamawa State, from where we boarded buses to Garoua, which took about six hours.

“Some of us took a boat from Yola to Garoua, which is about two hours on the waterways to the border town of Cameroon; then another four hours by road to the city hosting the Super Eagles.

“We had a pleasant experience on the road, though it’s not a new thing traveling by road to support the Super Eagles,” he said.

Ikpea said members of the club were subjected to COVID-19 protocol by the organisers.

“We travelled by road to Cameroon because it is cheaper. We were well received by the Cameroonians and we went through the COVID-19 protocols.

“While we were drumming along to the stadium, we were told that we needed to go for the COVID-19 rapid test, so we were delayed for about ten minutes into the match before we could have everyone tested.

“Now that we are well informed about the protocol, before the match we will mobilise ourselves on time to the match venue on Saturday. We must also praise Cameroonian officials as well, they are efficient,” he said.

Ikpea also said the members of the NFSC were camped at the Catholic Seminary in Garoua.

“The camp of the NFSC is not far from the stadium and is conducive enough for our members. There is no reported case of ugly incident since we got here.

“The Seminary where we are camped is serene and well-arranged; it gives us the opportunity to have a quiet time with the Lord as we cheer our team to glory,” he said.

The Media Officer of Lagos-based MFM FC, Olawale Quadri, also told NAN that the boat trip to the AFCON 2021 was pleasurable.

He added that the Cameroon’s immigration officers were courteous to them at the borders.

“I also travelled by road to Cameroon after connecting a flight to Abuja, then to Yola where I travelled by boat to the border of Cameroon, then to Garoua where the Eagles are camped.

“It was a pleasant experience on the waters against the impression of insecurity on the axis from Nigeria to Cameroon.

“The Immigration officials were kind to us after we introduced ourselves as journalists, we did not experience any major challenges. I think it is also good that some of the Cameroonians understand and speak English,” he said.

Quadri explained that the rapid COVID-19 test was a requirement to watch matches at the AFCON 2021 venues.

“When we got to the stadium, we were made to understand that we needed to do rapid COVID-19 test before going for any match.

“We can also have the test done a day before the match, this is a process for all and not for the journalists alone, and the spectators also have theirs.

“The test results are made available almost immediately, which is good for everyone,” he said.

A photojournalist, Victor Modo, said he had a smooth sail to Cameroon, adding that working in the Anglo-Franco country had been a pleasant experience.

“Working with people here is a good experience, they have no issues with us at all, they are warm people,” he said.

NAN reports that Nigeria kick-started its the AFCON 2021 campaign with a victory over the seven-time champions of the tournament, Egypt and currently sits atop Group D with three points.

The Austin Eguavoen-tutored team will slug it out with the 1970 AFCON winners, Sudan’s Falcons of Jeidiane at the Roumde Adjia Stadium at 5.00 p.m. local time on Saturday.

The Sudanese National team earlier had a pulsating 0-0 draw with the Djurtus of Guinea-Bissau. (NAN)