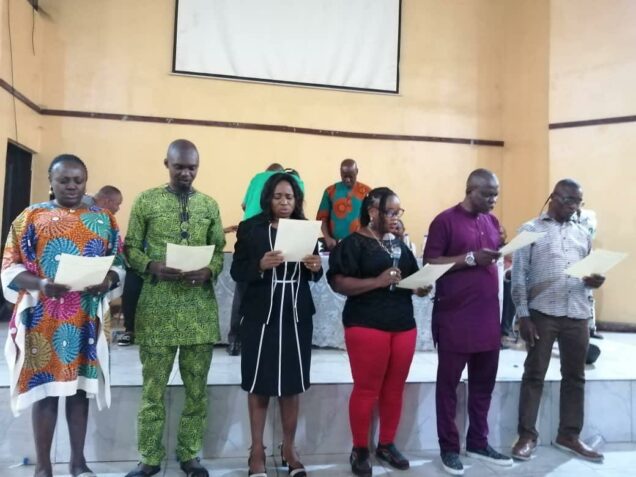 Comrade Stanley Job Stanley and Ikechukwu Wigodo have been re-elected as Chairman and Secretary of the Rivers State Council of the Nigeria Union of Journalists respectively for a second tenure of three years.

Comrade Job who polled 150 votes to beat his rival, Paul Bazia, who garnered 140 votes in the election conducted at the 7th Triennial Conference of the Council.

Bazie, who conceded defeat, congratulated the newly elected Chairman and his new executive.

The new Chairman, Stanley Job Stanley, appreciated the State Commissioner of Information, Paulinus Nsirim and elders of the Union who waded in to nip the protracted crisis that led to several postponements of the election in the bud.

His words:” There is no victor nor vanquished in this election. We welcome constructive advice from and will work with our colleagues who contested with us to advance the course of the Union.”

“I also use this medium to thank the Commissioner of Information,our Elders, veterans,our distinguished colleagues and security agents who contributed in many ways to make this day a reality.We are all winners”,he concluded.

Speaking earlier, Vice President, Zone F of the Union , Comrade Opaka Dokubo who supervised the election alongside other national officers, lauded members of Rivers NUJ for their display of maturity during the exercise.

He also commended them for keeping clam despite the hiccups and cancellation of election on Tuesday, January 18, due irregularities spotted during the voting.

“We have lost grounds but we will all support the new executive to move the Union to greater heights”, he said.

Other elected Executives are: Okechukwu Maru, Vice Chairman who polled 145 votes to beat Ibim Walson who polled 7i8 140 votes, Ike Wigodo, Secretary who beat his rival by 169 to 119 votes among other elected officials.

High point of the event was the swearing in of the new Executive by Opaka Dokubo and dissolution of the Caretaker Committee headed by Amaechi Okonkwo, the Chairman of the Correspondents’ Chapel, who took charge of the affairs for three months following the crisis which rocked the union.