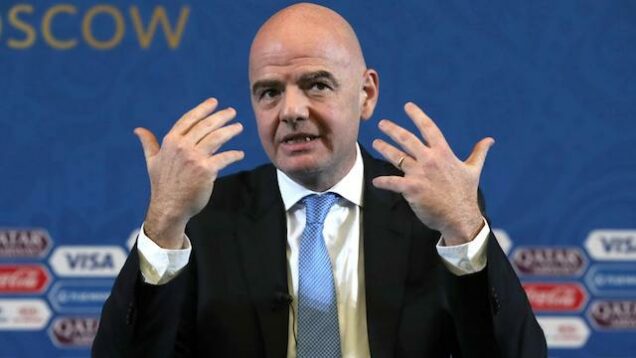 He spoke in support of his organisation’s calendar reforms at the Assembly of the Council of Europe in Strasbourg.

The leader of football’s world governing body said the proposals were vital to give the football world outside of Europe hope.

”We need to give hope to Africans so they don’t need to cross the Mediterranean in order to find, maybe, a better life but more probably death in the sea.

“We need to give opportunities and we need to give dignity, not by giving charity but by allowing the rest of the world to participate.”

Infantino criticised European behaviour amid the debate over whether the World Cup should be held every two years instead of every four.

“We see that football develops in a direction when some have everything and the majority have nothing,” he told the European Council in Strasbourg on Wednesday.

“In Europe, the World Cup takes place twice a week because the best players in the world play in Europe.”

Even within Europe it was pointed out there are large disparities.

Changing the World Cup cycle is a hugely controversial topic, with the powerful European and South American confederations against it.

Infantino also defended 2022 World Cup hosts Qatar over their human rights record, saying a change could not take place quickly. “In Europe, it took centuries and centuries,” he said.

“There is much to be done, much to be changed. We have to maintain pressure but also recognise there have been changes.”(dpa/NAN)