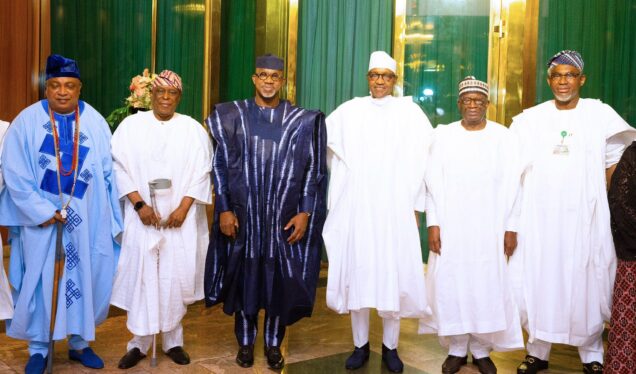 President Muhammadu Buhari, on Friday, received illustrious citizens of Ogun at State House Abuja, who had come to show appreciation for the visit paid their state a fortnight ago.

The delegation was led by Gov. Dapo Abiodun.

Abiodun said the visit was to “express appreciation for the love you have shown our state, and your visit has reassured us that you love our people, and you will continue to give us deserving support.”

He assured that he would continue to make life abundant for the people of Ogun, through adequate security and economic emancipation.

The Akarigbo of Remoland, Oba Babatunde Ajayi, who is also the Chairman of the Council of Obas, on his part said:

”Your visit was monumental. We are glad that you are part of the history of our state.

”I bring you the greetings and appreciation of the more than 300 Obas in Ogun.”

Other members of the delegation were Alhaja Salimot Badru, a former deputy governor, and Chief Sulaiman Adegunwa, a foremost industrialist.

The president had inaugurated landmark and legacy projects including roads and housing estates, which he described as ”projects of outstanding quality”.

Buhari particularly said the new roads would cut travel time considerably, lauding the governor for also working hard on security and other projects that touched the lives of the people.

He recalled that he began his military career in Abeokuta as a Second Lieutenant in the Nigerian Army, “so I will always see Ogun as home.”

The President appreciated Olusegun Osoba, a former governor of the state, who was in the delegation, saying “we have known each other for a very long time.”