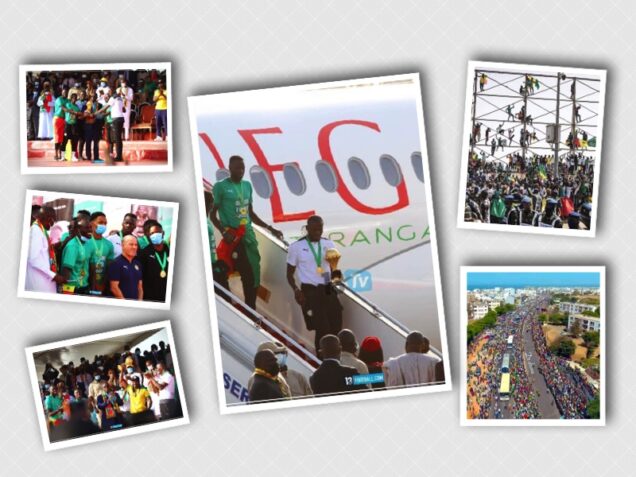 Some swung from a billboard frame. Others danced on the tarmac. As Senegal’s national soccer team, the Teranga Lions touched down in the capital Dakar after winning their first Africa Cup of Nations, each of the thousands of faces there to welcome them home was ecstatic.

Star player Sadio Mane scored the winning spot-kick to seal victory for Senegal in a 4-2 penalty shootout, following a 0-0 draw with Egypt in the decider in Yaounde the night before.

It was a long-awaited victory for the West African country that fell to Algeria in the last Cup of Nations final in 2019. Senegal also reached the tournament’s final stage in 2002, but lost to Cameroon in a shootout.

Sounds of fireworks, horns and cheers rang through the night in Dakar and into Monday morning, when hundreds of people wearing soccer jerseys or draped in Senegalese flags gathered outside the airport to await their team’s return.

“We have lost these games for so long. I’ve been watching the team since the 1970s, waiting,” said Thierno Niane, a 60-year-old computer programmer, who came from Dakar’s suburbs hours ago to cheer on the team.

“Last night I was crying in front of my family – my wife and my kids,” he added.

Senegalese dance music echoed from loudspeakers over the crowd of adoring fans as the team stepped out of the plane to a hero’s welcome. Roads surrounding the airport flowed with a river of supporters as long as the eye could see.

Fans arrived by bicycles, motorbikes, cars and on foot, bringing the otherwise busy highways to a joyous standstill. Among them were government officials and opposition politicians, celebrating the country’s victory together as one.

“We are very happy and very proud of our lions,” supporter Amina Cisse said. “Our dreams came true.”