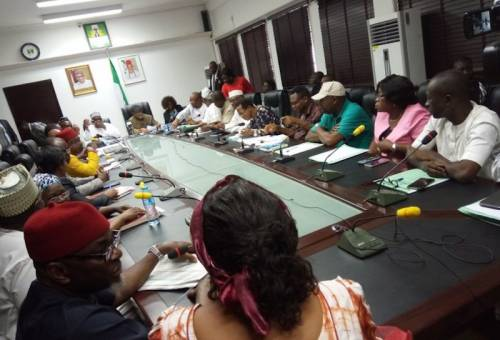 The National Executive Committee of the Academic Staff Union of Universities will commence a two-day meeting today to finalize the union’s decision on an impending strike.

The meeting will take place at the University of Lagos, Akoka.

The union had warned that a strike will commence if nothing is done by the government between February 12 and 13.

ASUU is demanding that the Federal Government implement the Memorandum of Action it signed with the union last year.

The union claimed President Muhammadu Buhari is avoiding its responsibility by asking ministers to oversee the implementation of the MoA.

ASUU said, “It is wrong for President Muhammadu Buhari to assign two ministers to oversee the implementation of the Memorandum of Action signed last year with ASUU.

Another statement issued by the union read in part, “Our union, ASUU, is using this medium to call upon the Federal Government of Nigeria once again to implement the agreement it signed with ASUU. It is unfortunate to mention that the FG signed an agreement with the ASUU since 2009, but the agreement is not implemented till date.

“The agreement was renegotiated in the name of peace. But to our dismay, the government has refused to sign the renegotiated agreement. In order to make the implementation of the agreement easy for the FG, the union has limited its demand to only three.

“These include the signing/implementation of the renegotiated agreement of 2009; and the adoption of the University Transparency and Accountability Software instead of the controversial IPPIS.”

In reaction to the comment made by ASUU, the Minister of Labour and Employment, Chris Ngige had said:

“The truth is that ASUU’s grievances are with the NUC, the Ministry of Education and the Ministry of Communications and Digital Economy. The issues are the deployment of their UTAS and the White Paper report on the universities.

“You know that we at the Ministry of Labour are not their employer; the Education ministry is their employer. Our job here is to act as reconciliatory officers.

“The President has mandated his Chief of Staff and the Minister of Education as well as the Ministry of Labour to step in, but my job is to step in as the reconciliatory officer if both sides refuse to settle their grievances. We will surely look into the matter.”

However, with the government yet to make any public move, ASUU members present at today’s meeting would vote either for — or against the strike.

A source who spoke with journalists today said: “The president of our union is not the one to decide on the strike. Also, none of the officers is expected to unilaterally decide on it. The issues at stake are to be tabled and debated at the meeting.

“Then, all the NEC members will vote either for — or against the strike. Whatever we decide on Sunday would form the next line of action.”

Asked if there were enough grounds for the lecturers to go on strike, the source answered in the affirmative.

“Yes, we have even started the strike earlier than now. But as parents, we have been waiting for the government to yield the ground, and fulfil the agreements it voluntarily entered with us.”