Lagos to probe use of petrol as souvenir at party 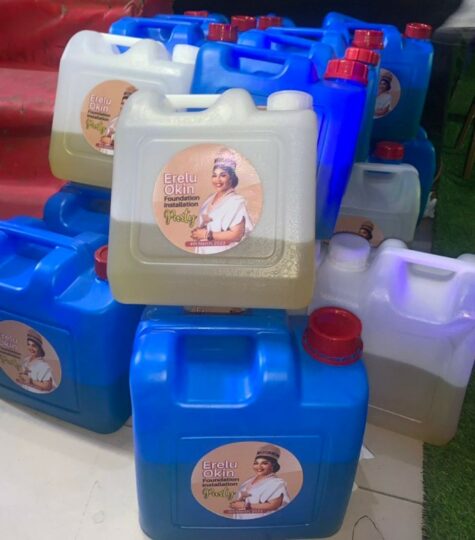 Kegs of petrol distributed as souvenir at a party in Lagos State.

Lagos State government on Saturday said it would probe the use of petrol as souvenir at a party held at an event centre in the state as seen in videos that have gone viral on the internet.

Information on the kegs indicated that the petrol in mostly blue and white containers were distributed to guests at an event tagged Erelu Okin Foundation Installation party.

Nigeria has been hit by scarcity of petrol with motorists queuing up for hours to fill their vehicles or buying at the black market at prices tripled the official rate.

Apparently, the organisers of the party had with the ongoing scarcity, considered petrol a valuable enough commodity to be given away as souvenirs to guests at the party.

But many Nigerians who reacted to the viral video showing the containers of petrol being shared at the party had cautioned that such action portends danger given the flammable nature of petrol.

Reacting to the video, Lagos Commissioner for Information and Strategy, Mr Gbenga Omotoso said there was no doubt that the action was dangerous and could lead to loss of lives and property, and it was against all safety measures in such places.

According to him, the Lagos State Government, through the Safety Commission, is investigating the matter and will ensure that all parties to the reprehensible action are made to account for it.

“The safety of lives and property of Lagosians and visitors remain a top priority to government.

“We, therefore, advise that actions that can lead to loss of lives and property be avoided,’’ Omotoso stated. (NAN)