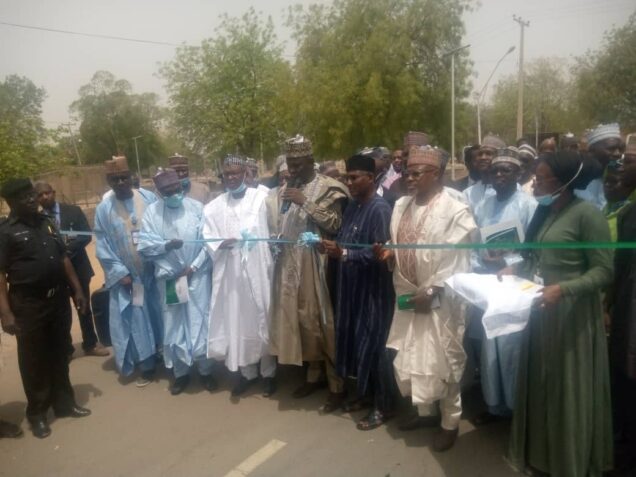 Federal Controller of Works in Kano, Engr. Yahaya Baba-Ali representing the Minister of Works and Housing, Babatunde Fashola, on Tuesday, at the inauguration of the 1.06-km road rehabilitated by the Federal Government at the Aminu Kano Teaching Hospital (AKTH), Kano

The Minister of Works and Housing, Babatunde Fashola, on Tuesday, inaugurated a 1.06-km road rehabilitated by the Federal Government at the Aminu Kano Teaching Hospital (AKTH), Kano.

Fashola, represented by the Federal Controller of Works in Kano, Engr. Yahaya Baba-Ali said the project is part of the Federal Government’s interventions on internal roads in various tertiary institutions.

“President Muhammadu Buhari-led administration has stepped up to lead the process of getting the work done and as well ensure that it cuts across all federal establishments across the country,” he said.

The minister said the gap of the infrastructural need is steadily being bridged by a gradual process of repairs, renewal and construction on major highways.

“It is true that we can have the best quality of infrastructure and good environment, hence we are expressing renewed enthusiasm with regard to some defective roads that have been rehabilitated.

“It is undebatable that quality of various institutions will be impacted by quality infrastructure, learning environment and those who doubt it should simply listen to some of the feedbacks from the benefitting communities where this type of intervention has taken place.

“We have successfully intervened in the internal road networks of 46 tertiary federal institutions and handed over 29 as at 2021 and we now have another 17 ready to be handed over.

“The ministry is currently attending to 30 roads in similar institutions across the country making a total of 76.

“This is consistent with our progressive idea of improving the human condition and that process continue here today as we hand over this road to the hospital as a critical intervention to support a good and ideal environment,” he said.

He said that 83 people were employed during the construction process, thereby contributing to job creation initiatives of the government, urging the hospital to ensure that the asset is used properly and not abused.

Speaking, the Chief Medical Director of Aminu Kano Teaching Hospital (AKTH), Prof. Abdulrahman Sheshe, described the road as an important part of the hospital as it allows easy access for patients.

He thanked the Federal Government for acknowledging the importance of the project which was done through Special intervention.

Sheshe also expressed gratitude to the Federal controller of works for his tireless efforts towards ensuring the completion of the road.

He said the intervention and the resultant beautiful ambience of the road on the hospital has placed the hospital first among others.