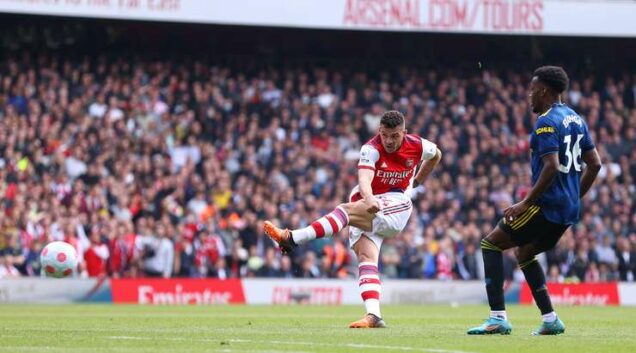 Arsenal on Saturday thrashed Manchester United 3-1 at the Emirates Stadium to compound the Red Devils’ misery and held on to fourth position.

Coming on the back of a humiliating 4-0 defeat to Liverpool, United needed to take something out of the Arsenal match, but it was another sad day for them.

Nuno Tavares opened scoring for the homers in just three minutes. He was in the right place at the right time to get to the rebound inside the box and gleefully rifled the ball into the left side of the goal.

Arsenal appeared to have double their lead on 28 minutes through Eddie Nketiah, who pounced on a loose ball inside the box and beat the goalkeeper with a shot inside the left post, but the referee ruled out the goal.

Bukayo Saka made it 2-0 for the homers four minutes later from the penalty spot, giving the goalkeeper David de Gea no chance.

Cristiano Ronaldo pulled one back for United on 34 minutes.

Nemanja Matic played a terrific cross over to Ronaldo, who found some space inside the box and put the ball into the back of the net.

Bruno Fernandes threw away a penalty to have levelled for United. His effort crashes against the left post.

Ronaldo’s goal on 60 minutes was ruled offside after a VAR review.

Then Granit Xhaka made it 3-1 for Arsenal on 70 minutes. He got to the ball and unleashed a strong shot from distance. It turned out to be a good decision as his effort found its way inside the right post.