Tyson Fury retires from boxing after knocking out Dillian Whyte 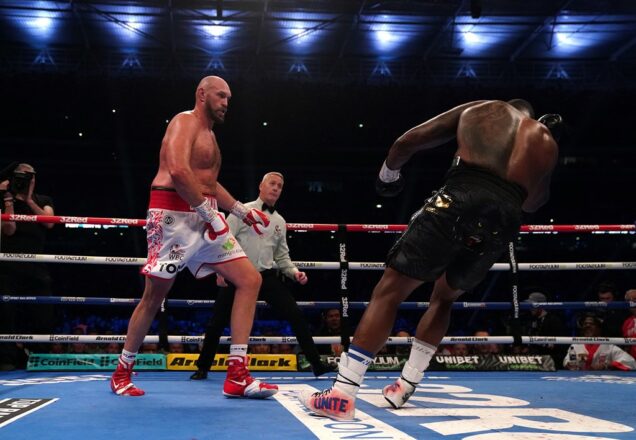 WBC heavyweight boxing champion, Tyson Fury has announced his retirement from the sport after knocking out Dillian Whyte on Saturday.

Fury knocked out Whyte in the sixth round of their encounter in front of 94,000 capacity-filled Wembley Stadium.

Speaking to BT Sport Box Office, Tyson Fury said said this would be his last fight and was happy that he had remained undefeated in 33 fights.

“First of all, I want to say I dedicate this to my Lord and Saviour Jesus Christ. In his name I won this fight in my lively country. In my England. We are Spartans.

“I’m overwhelmed by the support. I cannot believe 94,000 countrymen and women came here to watch me. From the bottom of my heart thank you to everyone who bought a ticket and stayed up late to watch this fight,” he said.

Fury described Whyte as a warrior and believed that he would be a world champion one day.

“Dillian [Whyte] is a warrior and I believe he will be a world champion. One of the greatest and, unfortunately, he had to fight me tonight. You are not messing with a mediocre heavyweight, you are messing with the best man on the planet.

“This man, Sugar Hill [Steward], has made the man I am. He has made me the biggest boxer in the heavyweight division.

“I promised my wife that would be it after the [Deontay] Wilder fight. But I got offered a fight at Wembley and I owed it to the fans. What a way to go out,” he stated.

Fury also told Sky Sports that he is a man of his word and that this would be his last fight.

“I am a man of my word. This might be the final curtain for The Gypsy King and what a way to go out!” he said.