Tinubu has no serious contender for APC ticket: TSG 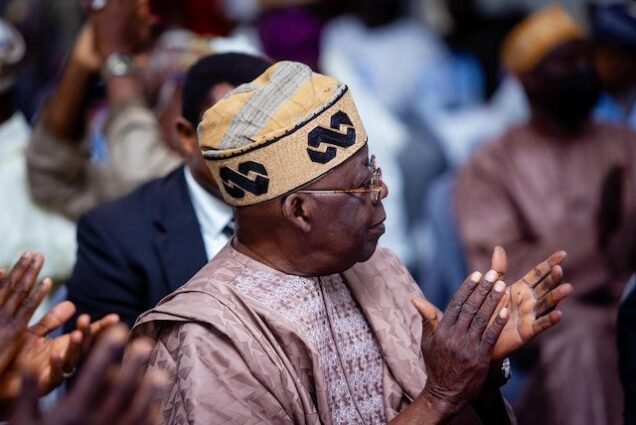 The Tinubu Support Group (TSG) on Friday in Abuja, said there is no opposition that could prevent Sen. Bola Tinubu presidency from emerging in 2023.

The group also said that it only recognised Sen. Bola Tinubu, the All Progressives Congress (APC) leader as the only presidential aspirant in the 2023 presidential race.

Mr James Faleke, House of Representatives member representing Ikeja Federal constituency, said this when he led members of the group to pick up the APC Expression of interest and Nomination forms for Tinubu in Abuja.

“We are here as a team on behalf of Asiwaju Bola Ahmed Tinubu to pick up the forms that he had personally paid for, because he is out of the country.

“He paid for his forms directly and asked us to come and pick up the forms. He is the only contestant we know,” Faleke said.

He added that whatever mode of primary the party decided to come up with, Tinubu would emerge as the APC 2023 presidential candidate.

“It is the party that has the authority to advocate for the mode of primaries. It is not in our purview to do that, whatever mode, direct or indirect, we will win the election by the grace of God,” he said.

He added that Tinubu at the appropriate time would deliver his address to the nation, saying that the country would be better under a Tinubu presidency.

“He will deal with the economic situation of this country as he did in Lagos State when he was the governor.

”He is a man who rewards loyalty and ensures that people who work are also taken care of.

“He will ensure that employment opportunities are better , the issue of strike will be a thing of the past,” Faleke said.

Mr Babachir Lawal, a former Secretary to the Government of the Federation (SGF) said Tinubu is a branded product, adding that every Nigerian knew that he is the man to beat.

He assured that Tinubu would emerge as the country`s next president come May 29th, 2023.

“If we were not sure we have chances to win this election, we would not waste our N100 million.

“Everybody is free to buy the forms if he has N100 million, the choice is his.

“But as far as we are concerned, we are only fulfilling the constitutional requirement of campaigning and going for election. We don’t foresee any opposition in the contest.

Some of those in the 2023 presidential race in the APC include Mr Rotimi Amaechi, Minister of Transportation and Sen. Rochas Okorocha, the former governor of Imo.

Also in the race are Dr Chris Ngige, Minister of Labour and Productivity, Mr Chukwuemeka Nwajuba, Minister of State for Education and Gov. David Umuahi of Ebonyi.