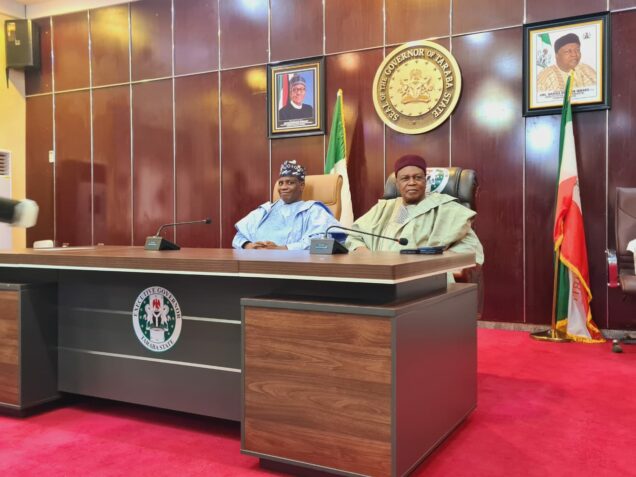 The Taraba state PDP chairman, Kefas Dantalab who stated this when Govenror Tambuwal visited the state on his Presidential campaign tour said “Taraba is Tambuwal, Tambuwal is Taraba”.

Governor Tambuwal who was received at the Taraba state government House by Governor Ishaku Darius; the state deputy governor Haruna Manu, Speaker of the state House of Assembly Rt Hon. Joseph Albasuk; Taraba State PDP chairman Hon Kefas Dantalab, and members of the State executive council as well as members of the state House of Assembly said he’s the leader that is accepted by all regions and sectors of Nigeria.

“Leadership is a trust from God almighty and I offer myself to via, first as the Presidential candidate of our party, then President of this country.

“Part of the challenges we have today with the leadership at the centre, is the inability to equitably deliver leadership even in the distribution of appointments and distribution of the resource in this country including, of course, various infrastructure development.

“Nepotism is at its peak and Nigeria has never been more divided as it is right now and I believe that with the qualities that I have earlier mentioned, and a lot more, I possess the right quality of leadership required by our country today.

“When you look at 1999 till date, we are talking about twenty-something years; those toddlers are now of voting age, and they are in multitudes needing leadership that connects to their generation and as at today, of all aspirants in our party, I’m close to the old generation and closer to the young generation.

“These younger ones are struggling and saying give us a leader that will understand our communication, our issues so that when we talk about cryptocurrency, the leader will under what it is, what is required to make it a lawful business and by so create jobs. that is the dynamics of the next world.

“I’m the leader that is accepted by all regions and sectors of Nigeria. Sir, this election is for PDP to lose. All the indices are clear is that we can win this election by presenting a candidate that will have the appeal from across the country.

On his part, Governor Darius said Governor Tambuwal possesses the three Cs of leadership – Character, Competence, and Capacity and has the right temperament to lead Nigeria in such a challenging time.

He further spoke on governor Tambuwal’s humility which he said he witnessed firsthand while the governor was speaker of the House of Representatives.