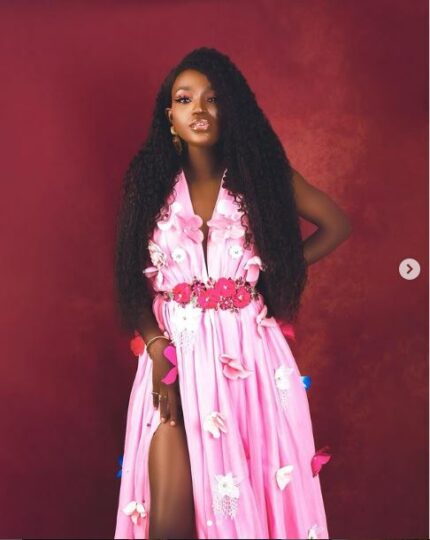 The screen diva took to her Instagram page to share gorgeous photos of herself rocking a floral pink dress with a high frontal slit.

The mum of one who is so grateful to God for life wrote, “LORD, I JUST WANT TO SAY, THANK YOU FOR LOVING ME. 🙂
GRACE WILL FOREVER BE GRATEFUL. 🙏🏼
+1
+Everything Great God and Life Could Offer. 🥂”

She graduated from the Obafemi Awolowo University, where she studied Theatre Arts.

She came into the limelight right after producing a movie titled Ayomi (My joy).

The movie was shot in July 2014 in Lagos, Nigeria, and officially released into the market on the 21st of September 2015.

Oluwasina partnered with Pepsi, AVF, and Vivas for the premiere of Ayomi.

According to her, she shot the movie while she was still studying at the Obafemi Awolowo University.

Her debut movie, ‘Ayomi’, won many awards and got a number of nominations, including the 2015 Africa Magic Viewer’s Choice Awards in the Best Indigenous Movie (Yoruba) category, the Best of Nollywood Awards (BON Awards), MAYA Awards, and ACI Awards.