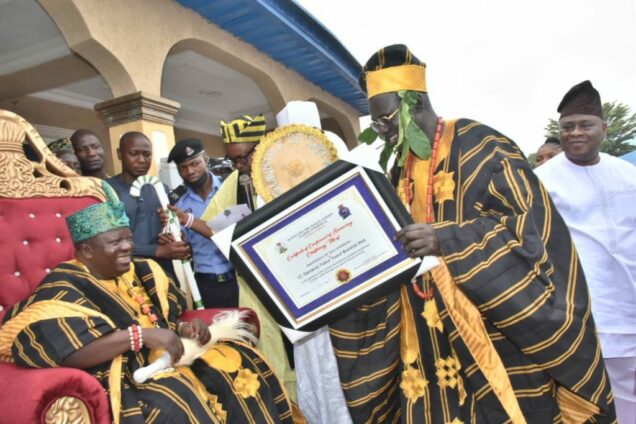 Former Chief of Army Staff, Retired Lt.-Gen. Tukur Buratai has been conferred with an honorary chieftaincy title of Jagunmolu of Sakiland.

He received Instruments/Certificate of Office from the Okere of Saki, Oba Khalid Oyedepo on Saturday.

Also, Retired Lt.-Gen. Lamidi Adeosun was conferred with the honorary title of Akinrogun of Sakiland at the ceremony.

Speaking of his new title, Buratai said it was a sign of unity in Nigeria, adding that it must be emulated by all Nigerians, irrespective of religion or tribe.

He said that there could be a likelihood of conflict, distrust and acrimony in a society or country where there was disunity.

“We must accommodate everyone from all walks of lives.

“My traditional title is a sign that Nigeria is one and symbol of unity, that wherever you are coming from, you are recognised for what you have done.

“I see it as a great honour to me as a person, my family, community, which is Borno State and the Nigerian Army, where I served and retired.

“It is also to all peace-loving Nigerians that are fighting for unity and peaceful coexistence of fellow Nigerians,” he said.

Buratai appreciated the Okere of Sakiland and the entire people of the community for honouring him based on what he has done for the country while in the service.

Meanwhile, he called on Nigerians to continue to support the Nigerian Army in performing its constitutional role.

Buratai commended Col. Gbenga Adegbola, an indigene of Saki, for his loyalty and love for the people of the town.

According to him, Adegbola had attracted various developmental projects, such as Command Science Secondary School, among others, which were beneficial to the town.

Also, the Okere of Sakiland, Oba Khalid Oyedepo, said the titles were conferred on Buratai and Adeosun for their immense contributions to Sakiland and Nigeria in general.

Oyedepo called on youths to imbibe the attitude of the title s and be serious about their education, urging parents to pay attention to the education of their wards for the nation’s growth.