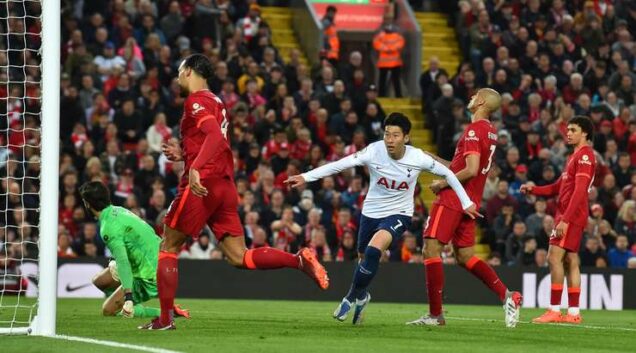 Liverpool’s premier league title bid suffered a setback on Saturday as they were held to a 1-1 draw at the Anfield Stadium.

Though, Liverpool still moved top on goal difference ahead of Manchester City, they will be three points adrift of their rival if they beat Newcastle United on Sunday.

The match was expected to be a cracker as Tottenham also needed a win to go over Arsenal and brighten their chances of Champions League football next season.

After the early minute rush and pressure from Liverpool, the visitors soaked in the pressure and crawled back into the game.

The first half ended goalless.

Son fired home from very close range after latching on to a pass from Ryan Sessegnon.

The homers stepped up the pressure on Tottenham, knowing the consequences of losing the game.

They got a deserved equaliser on 74 minutes.

Luis Diaz tried his luck from the edge of the box and his shot took a deflection and went past the stranded Hugo Lloris.