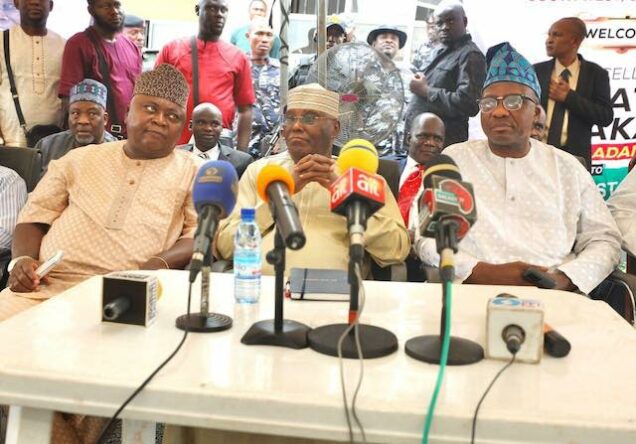 Delegates from Ogun state to the convention of the Peoples Democratic Party on May 28, have promised former Vice-president Atiku Abubakar bloc votes.

Secretary of the party, Mr Sunday Solarin, gave the assurance on Saturday, when Atiku came on a solicitation visit.

Atiku visited Abeokuta to seek the support of the delegates ahead of the presidential primary.

He explained that if voted into power, he would govern Nigeria on a five-point agenda which he listed as unity, security, economy, education and devolution of more resources and powers to the federating units.

“I promise to give every part of this country a sense of belonging as we did in the past.

“When we came to power in 1999, we experienced lack of unity and the first thing we did was to form a government of national unity which engendered the peace we needed for successful governance.

“I am going to tackle insecurity because once you tackle insecurity, there will be peace and when there is peace, you can now begin to implement economic reforms which will create jobs and bring about development.

“I am also going to tackle the issue of decentralisation or rather, devolution of powers to the state and the local governments,” he said.

Atiku recalled that he did not visit Ogun during the 2019 presidential primaries of the PDP because he was angry with members of the party in the state for lack of unity.

“I was angry with you people because you allowed outsiders from the South-West region to manipulate you and dictate the way you ran your affairs.

“As long as there is disunity, you will continue to lose election in Ogun.

“I am, however, happy because you are now united and I urge you to sustain this unity,”he said

He said with sustained unity in Ogun PDP, the party would take over power from the ruling All Progressive Congress (APC) in this state.

“This will in turn enable you to positively affect lives of the people of this state,” Atiku said.