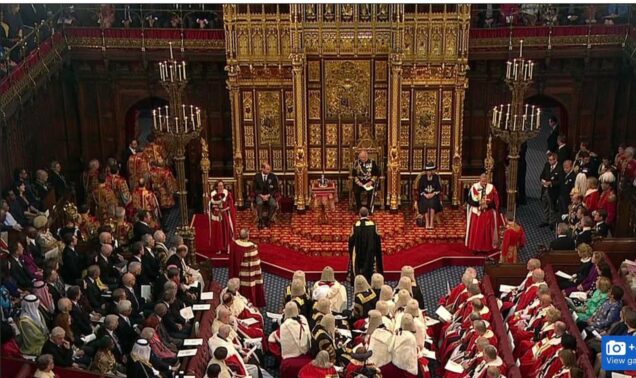 Charles was supported by his son William and his wife Camilla at the State Opening of Parliament. He sat on the Consort's Throne, which is slightly smaller than his mother's, which was left empty out of picture

An emotional Prince Charles today stepped in for his mother at the 11th hour to read the Queen’s Speech after the new session of the British Parliament on Tuesday.

The heir to the throne appeared emotional as he gazed at the crown before the nine-minute address.

The Queen’s speech was written by the British government and sets out its agenda for parliament’s new session.

The Queen, 96, reluctantly pulled out of the major ceremonial occasion nearly 60 years after she last missed it, following advice from her doctors as she continues to experience “episodic mobility problems”.

As Charles, 73, takes on the head of state’s major constitutional duty for the first time, the move was interpreted as symbolic and a significant shift in his responsibilities as a future monarch.

The Duchess of Cornwall, a future queen consort, also accompanied Charles, but the queen’s main throne remained empty in the House of Lords.

The decision was taken on Monday, and the queen’s mobility issues were said to be a continuation of the problems she has suffered since the autumn.

A new letters patent authorized by the queen was issued to cover the state opening, delegating to counselors of state, the royal function of opening a new session of parliament.

In this instance, it enables Charles and William to jointly exercise that function.

No other functions have been delegated by the queen.

Buckingham Palace had said in a statement: The queen continues to experience episodic mobility problems, and in consultation with her doctors, has reluctantly decided that she will not attend the state opening of parliament tomorrow.

“At her majesty’s request, and with the agreement of the relevant authorities, the prince of Wales will read the queen’s speech on her majesty’s behalf, with the duke of Cambridge also in attendance.”

The queen last missed a state opening of parliament in 1959 and 1963, when she was pregnant with Prince Andrew and then Prince Edward, when her speech was read by the lord chancellor.