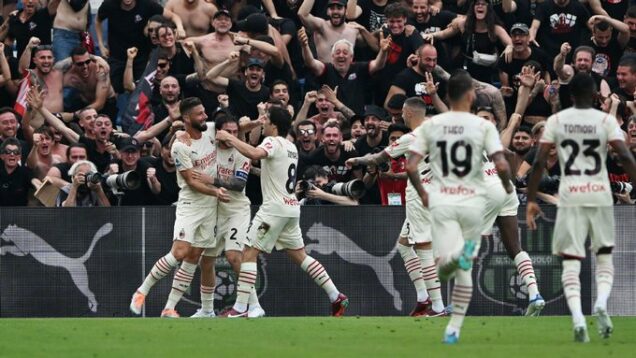 AC Milan have won the Italian Serie A title after demolishing Sassuolo 0-3 away from home, ending 11 years wait to lay their hand on the trophy.

AC Milan needed to win as Inter Milan were waiting for their downfall to profit from, but they did not disappoint as they won.

The visitors opened the scoring on 17 minutes. Rafael Leao laid the ball off to Olivier Giroud, who shot from close range low into the back of the net, leaving the goalkeeper helpless.

Milan got the second goal on 32 minutes through Giroud again.

Leao put the ball across the area and Giroud had the easiest task in the world to tuck the ball into an empty net.

Milan made it 0-3 on 36 minutes. It was Leao who began the build up to the goal.

He squared the ball to Franck Kessie, who beat Andrea Consigli with a brilliant shot into the top of the net.

In the other game, Inter Milan hammered Sampdoria 3-0. They were hoping that their neighbour, AC Milan falter to retain their title, but it did not happen.

He made a yard for himself after a well-taken pass inside the box and netted inside the right post.

Joaquin Correa made it 2-0 on 55 minutes as he found some space just outside the penalty area after exchanging the ball with his teammate and struck a shot towards goal that went inside the right post.

Two minutes later, Joaquin Correa got his brace, sending the ball into the left side of the goal and made it 3-0.