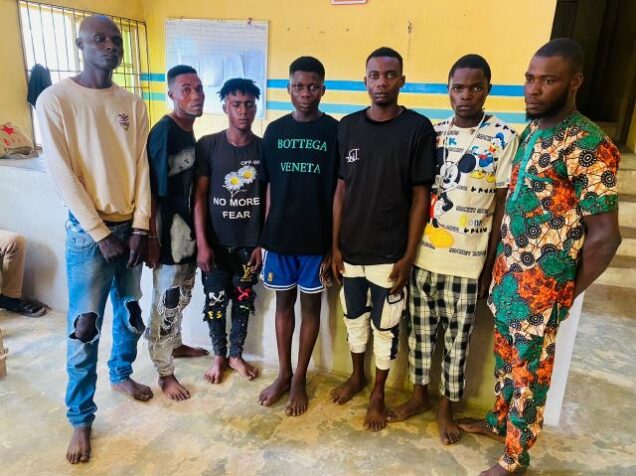 Seven members of dreaded cult groups, Eiye and Aiye, have been arrested by operatives of the Ogun State Police Command during a supremacy battle at Ijaye area of Abeokuta.

The command’s spokesman, DSP Abimbola Oyeyemi in a statement on Tuesday said the suspected cultists; Kazeem Ogundairo a.k.a NEPA; Nasiru Idris a.k.a Aloma; Ayo Joshua a.k.a Terry G; Damilare Shogbamu a.k.a Dhray; Bisiriyu Ibrahim Owoyele and Labulo Jamiu a.k.a Jay boy, were arrested following a distress call received from residents of Ijaye area that, the cultists were running riot in the area.

He said upon the distress call, the Commissioner of Police, CP Lanre Bankole, directed the special squad led by ACP Bolanle Muritala to move to the scene and bring the situation under control.

“On sighting the policemen, some of the hoodlums ran to different direction, while some engaged the policemen with dangerous weapons.

“At the end of the encounter, the squad succeeded in arresting seven among the hoodlums, while others escaped.

Meanwhile, CP Bankole has ordered a continuous operation “clampdown” on all known cultists in the state in order to put an end to their nefarious activities across the state.

Ogun State, in recent time has been the haven of cult groups, maiming and killing innocent lives.