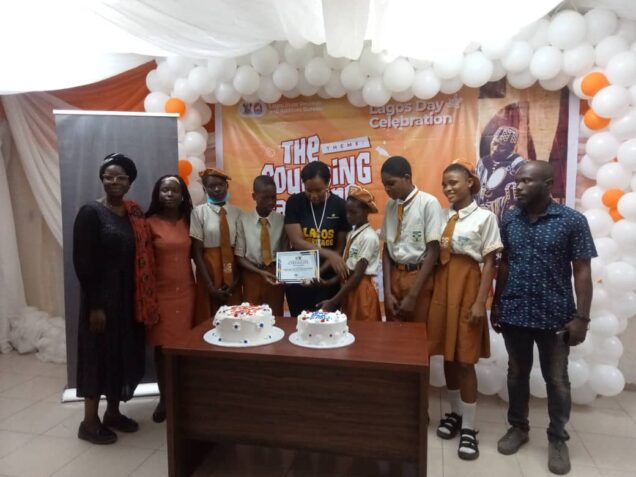 School children at the event

The Lagos State Records & Archives Bureau (LASRAB), has reaffirmed its commitment to promoting and preserving the rich heritage and cultural values of the people of Lagos State.

This, it plans to do through constant sensitization and showcasing of the various historical artefacts in its repository for public appreciation.

According to the Director General, Mrs. Bilikiss Adebiyi-Abiola, “the Bureau, in fulfilling its mandates of record keeping for development as well as Heritage and Tour Promotion, chose the auspicious occasion of the Lagos State Day celebration this year to encourage children in the senior secondary schools selected from across the state to visit the facility for an educational and historical view of Lagos State and Nigeria as a whole.

“This year’s edition of the Lagos State Day, themed “The Founding Fathers of Eko” commemorates the valor of great Lagosians in the history of the state, who contributed sacrificially to the growth and development of the Lagos State the world now knows today, focuses on children, who are being celebrated globally today. It’s no surprise the two celebrations fall on the same day.

“The aim of the event is to catch the children young by sensitising them on the importance of history and cultural heritage and how they can better appreciate it, as children are highly impressionable at this stage and they cherish whatever they are taught to value.”

The event featured a tour of the LASRAB mini museum, theatrical group performance, historian guest speakers, art exhibition, display of cultural costumes and other side attractions.

Adebiyi-Abiola further said, “The State Government is committed to ensuring that records of enduring value and historical artefacts are well preserved and maintained for the general public to make a recourse to and to serve as a veritable reference point.

“A people without a carefully preserved historical heritage will soon go into extinction, as there will be nothing for the future generation to make reference to in order to establish their original identity. Also, our responsibility as an Agency of government is to educate and sensitise the general public on the need to imbibe the culture of contributing to the rich heritage of Lagos State by donating records and artefacts of enduring value to the archive of the state.”

The Director-General stated that the event was in conformity with the present Administration’s T.H.E.M.E.S Agenda to promote Entertainment and Tourism for the benefit of the people of Lagos State.

Lagos State, created on May 27, 1967 by verdict of the State Decree No. 14 of 1967 which reconstructed Nigeria’s Federation into 12 states, has been commemorating the date of creation and the event is expected to raise the stakes in heritage preservation.