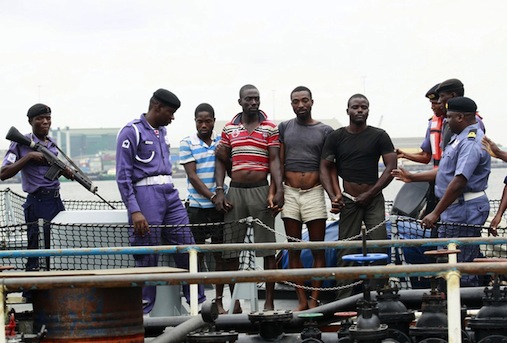 A study by the Stable Seas research institute found that pirate groups, mostly in the Niger Delta, can earn around $5 million per year through theft and hostage-taking.

It said that conservative estimates put the cost of piracy to coastal states at $1.925 billion a year, including through lost employment.

The report comes as the UN Security Council on Tuesday urged greater action to stop piracy in the Gulf of Guinea, which has become by far the world’s riskiest waters for maritime kidnappings.

A Security Council resolution — approved unanimously despite high tensions between veto-wielding Russia and the West — said it “strongly condemns” the spike of piracy in the West African waters.

The Council “urges member states in the region of the Gulf of Guinea to take prompt action, at national and regional levels, with the support of the international community, when requested by the state concerned.”

It called on all nations in the region to develop their own plans and to criminalize piracy in domestic laws.

According to a UN report, 27 of the world’s 28 recorded kidnappings at sea in 2020 took place in the Gulf of Guinea.

Stretching for 5,700 kilometers (3,500 miles) from Senegal to Angola, the Gulf of Guinea is rich in hydrocarbons and fisheries and borders some 20 countries, including ones with limited naval and coast guard capacities.

The resolution was co-sponsored by Ghana and Norway, which both said that piracy posed international risks.

Harold Agyeman, Ghana’s ambassador to the United Nations, said that piracy constituted “one of the foremost security concerns on the African continent.”

Piracy “risks compounding multifaceted challenges facing the region including a surge in terrorism, a return of coup d’etats, a deepening of climate change as well as the worsening impact of the Covid-19 pandemic.”