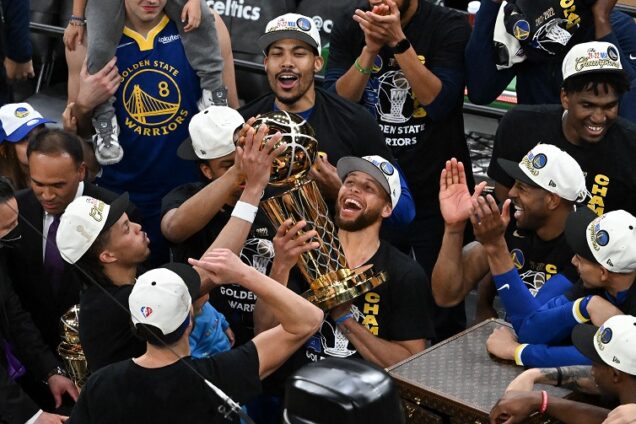 The Golden State Warriors beat the Celtics 103-90 in Game Six of the NBA Finals in Boston on Thursday to win the Championship trophy for the fourth time in eight seasons.

Stephen Curry led the way for the visitors with 34 points, seven assists and seven rebounds to claim his fourth title and first Finals MVP award.

“I’m so proud of our group,” an emotional Curry said after the win, adding, “… at the beginning of the season nobody thought we would be here except everybody on this court”.

The triumph is a remarkable turnaround for the Warriors, who missed the playoffs in the past two seasons amid a torrent of injuries before defeating the Nuggets, Grizzlies, Mavericks and Celtics this year to claim the Larry O’Brien trophy.

“We were so far away from it,” Curry said.

“We hit rock bottom with injuries and the long road of work ahead and trying to fill in the right pieces and the right guys.

“You can’t ever take this for granted because you never know when you’re going to get back here.”

With their backs to the wall, Boston raced out to a 12-2 lead with a three-pointer by Jayson Tatum, whipping the green-and-white clad fans at TD Garden into a frenzy.

But the more experienced Warriors squad kept chipping away and a three-pointer from Curry gave the visitors a 24-22 lead late in the first quarter.

A Boston turnover led to an Andrew Wiggins jam that capped a 21-0 run in the second quarter for the Warriors and the lead ballooned to 18 points when Draymond Green found Klay Thompson under the basket for an easy layup.

Leading 54-39 at halftime, the Warriors did not look back.

Curry knocked down a three-pointer from well beyond the arc to give the Warriors their largest lead of the night at 72-50 with six minutes to go in the third, pointing at his finger to show where his fourth championship ring should go.

The young Celtics team tried to claw their way back but their cause was not helped by 23 turnovers that led to 20 Warriors points, while they also lost the rebounding battle.

“The future is bright and we’re just getting started,” he said.

It is the seventh title overall for the Warriors franchise, which was founded in Philadelphia in 1946 as one of the original members of the Basketball Association of America.

The Warriors also captured the league’s first championship in the ’46-47 season. (Reuters/NAN)