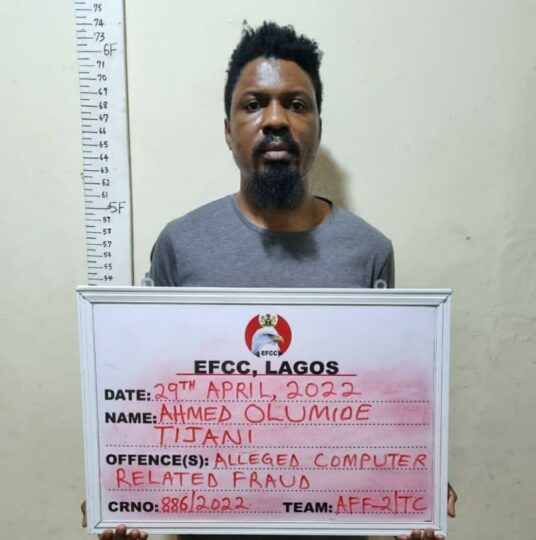 Justice Mojisola Dada of the Special Offences Court sitting in Ikeja, Lagos has convicted and sentenced Ahmed Olumide Tijani to one-year imprisonment for a romance scam.

He was jailed on Wednesday, June 22, 2022, after pleading guilty to an amended one-count charge, bordering on possession of documents containing false pretense, preferred against him by the Lagos Zonal Command of the Economic and Financial Crimes Commission, EFCC.

The count read: “Ahmed Olumide Tijani, sometime in the month of April 2022, at Lagos, within the jurisdiction of this Honourable Court, with intent to defraud, had in your possession documents containing false pretenses, wherein you falsely represented yourself as a female.”

Following his guilty plea, the prosecuting counsel, T.J. Banjo, called a witness to give a review of the facts against the defendant.

The witness, Vincent Sunday Kwambuge, an operative of the EFCC, identified the defendant as one of the 18 persons arrested during a sting operation, following some intelligence reports received by the Commission.

He told the court that mobile devices recovered from the defendant, at the point of arrest, were analyzed and the defendant also volunteered his statement, in which he admitted to engaging in romance and from which he benefitted $1,200.

The prosecution tendered in evidence the statements he made to the EFCC, the fraudulent documents printed from his device as well as a bank draft of N500,000.

There was no objection from the defense counsel, Damilola Ayinde-Marshall.

The documents were, therefore, all admitted in evidence against the defendant as Exhibits 1 to 3.

Justice Dada found him guilty as charged and sentenced him to one year in prison.

He was, however, given an option of a fine of N500,000 ( Five Hundred Thousand Naira only) following the allocutus of his counsel.

The judge also ordered the forfeiture of all items recovered from him.

Additionally, he was ordered to sign an undertaking with the EFCC to be of good behavior upon his release.