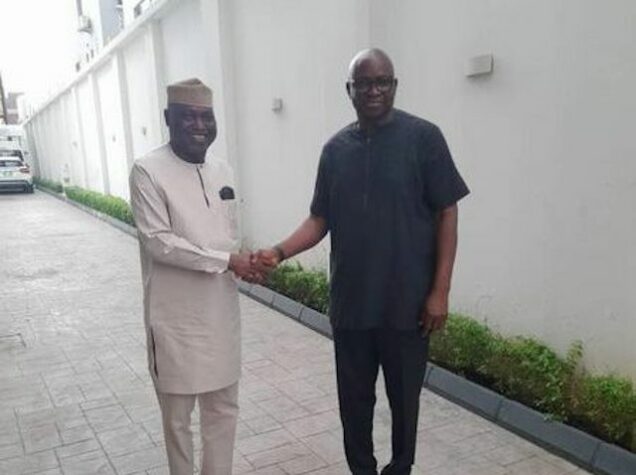 Oyebanji and Fayose in Lagos

The meeting with Oyebanji in Lagos, came moments after Fayose denounced his party for supporting Atiku Abubakar from the northern part of the country, to be its presidential standard bearer.

“The PDP Constitution provides for a rotational Presidency”, Fayose stated.

“Section 3(c) provides that the Party shall pursue its aims & objectives by adhering to the policy of the rotation & zoning of Party & Public elective offices in pursuance of the principle of equity, justice and fairness.

“The current President of Nigeria is a 2-term Northern Presidency, thus implying that it MUST be a Southern Presidency in 2023 or NOTHING. Awa ‘South’ lo kan’,” Fayose tweeted.

Oyebanji in a post on Facebook said the visit was in line with his plan to reach out to notable Ekiti leaders before taking over the mantle of leadership in October.

“Our discussion centred mainly on Ekiti development and the need for every citizen to play his or her role creditably.

“Ex Governor Fayose, the PDP Governorship Candidate, Chief Bisi Kolawole and the state chapter of PDP had sent congratulatory messages to me shortly after I was declared winner of the June 18 election.

“I do not take the gestures for granted,” he wrote.