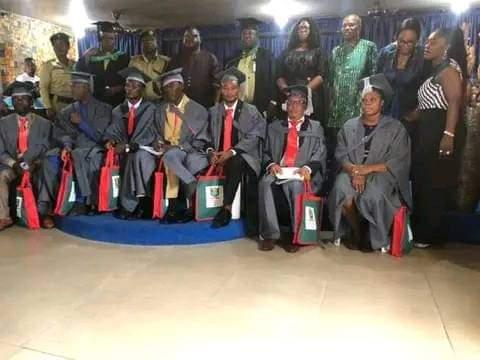 The seven inmates of Port Harcourt Maximum Custodian Centre graduates from the National Open University of Nigeria, NOUN, after receiving their certificates

Seven inmates from the Port Harcourt Maximum Custodian Centre who graduated from the National Open University of Nigeria have been handed their certificates.

Speaking at the occasion, Deputy Controller of the Correction DCC, in charge of Human Resources, Benson Luck advised the public to avoid stigmatizing inmates who obtain degree certificates while in custody.

He urged stakeholders to join hands with the NOUN and the Correctional Centre to encourage academic pursuit of inmates.

On his part, the Deputy Controller of Correction in charge of Port Harcourt Maximum Correctional, Centre Etim Effiong, said the center is committed to the goal of ensuring that every inmate enrolls to further their education.

The Registrar of NOUN, Felix Edokan while presenting the certificates to the seven graduates said one of them graduated in the Second Class Upper.

These inmates were part of the graduates for the 2021/2022 academic session of the NOUN concluded in March this year.