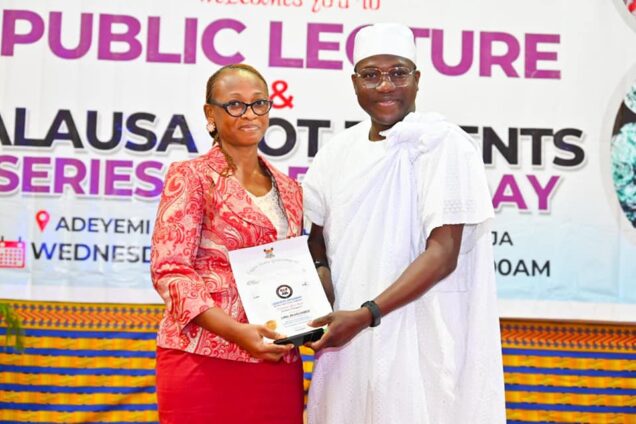 Muri-Okunola presenting award to one of the winners

The Lagos State Government has charged public servants in the state to be good ambassadors and maintain good leadership roles they have been known for in the recent past.

The theme of the public lecture is: “Building Back Better From Covid -19: Enhancing Innovative Partnerships To Meet SDGs- The Lagos State Government Model.”.

Egube said that the topic was carefully selected to prepare workers for the task ahead, adding that this would enable the workers to be focused on the role of the public institutions and the public servants in building back better from the Corona Virus pandemic.

“This will be done while keeping the 2030 deadline for implementing the Sustainable Development Goals (SDGs) in focus,” he said

He said despite the covid, the present administration ensures welfare of the workforce is a top priority of the administration. saying that the state’s workforce remains resolute at building back better and providing better service delivery can bounce back from COVID-19 pandemic”.

Lagos State Head of Service, Hakeem Muri-Okunola, noted that the event symbolised a specific way to balance work and play, as it would also encourage all the public servants to showcase their talents.

While recognizing the outstanding public servants for the Year 2022, in senior and junior categories, Muri-Okunola reiterated Governor Babajide Sanwo-Olu’s commitment to the priority of staff welfare since assuming office.

He described this as a recognition of the significant contributions of Public Servants to the numerous achievements of the Government in Lagos State.

Muri-Okunola admonished all the public servants not to rest on their oars as they are the mouthpiece of the present administration.