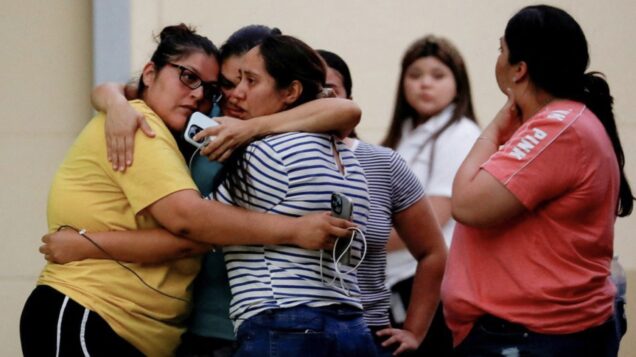 Surveillance footage captured the gunman crashing his vehicle near the school, coming out with a AR-15 style rifle, to aim first at two persons who approached the crash scene.

Then it shows audio of panic in the school and the call on 911.

It shows the gunman enter the building and later shows officers in body armor milling in the hallway outside the fourth-grade classrooms where 19 children and two teachers were killed.

The video published Tuesday by the Austin American-Statesman shows parts of the nearly 80 minutes that passed between the gunman walking into Robb Elementary through an unlocked door and the time when his death put an stop to America’s deadliest school shooting in nearly two decades.

The four-minute video from May 24 shows two officers approach the classrooms not long after the gunman and then run back amid the sounds of gunfire.

It shows officers, some with shields and rifles, massing in the hall before they breached the room and killed the gunman about an hour later.

The edited footage was published as Texas lawmakers investigating the massacre are preparing to release their findings and show body-camera and surveillance footage to mourning families and other residents of Uvalde.

Officials said the 77 minutes of footage they are preparing to release this weekend does not contain images of children.

The video footage has received renewed attention over the past week as anger mounts in Uvalde over an incomplete account about the slow police response and calls for accountability seven weeks after the worst school shooting in Texas history.

Rep. Dustin Burrows, a Republican leading an investigation into the shooting, tweeted that the video and findings from a preliminary report will be shown Sunday in Uvalde to residents and distributed publicly soon after.

“We feel strongly that members of the Uvalde community should have the opportunity to see the video and hear from us before they are made public,” Burrows tweeted.

Nineteen children and two teachers were killed. Police waited more than an hour after the shooting began before confronting the gunman, who was killed by police.