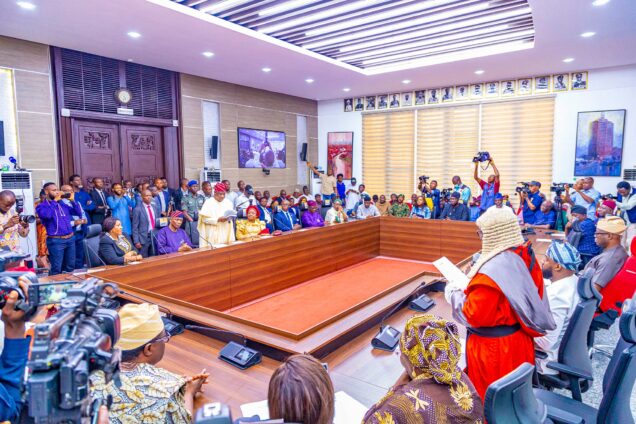 Chief Adebayo Lawal being sworn - in as the new Deputy Governor of Oyo State, following the impeachment of Alhaji Rauf Olaniyan on Monday evening

Chief Adebayo Lawal was on Monday evening sworn in as the new Deputy Governor of Oyo State, following the impeachment of Alhaji Rauf Olaniyan by the House of Assembly earlier in the day.

The swearing ceremony held at the Executive Chambers of the Governor’s Office, Secretariat, Agodi in Ibadan, was sequel to his confirmation by the Assembly after his nomination by Gov. Seyi Makinde, as replacement for Olaniyan.

The News Agency of Nigeria (NAN) reports that the state Chief Judge, Justice Munta Abimbola, administered the Oaths of Allegiance and Office on the new deputy governor.

Makinde, in his brief remarks, urged his deputy to put the interest of the state first and see his new assignment as a position of trust.

According to him, the new position is an evidence that Lawal excelled in his previous position.

“But, for us, as the saying goes that the reward of hard work is more work, that’s why we’re giving you more work.

“The position of deputy governor is a position of trust, our masters are the good people of Oyo State.

“So, our responsibility is to continue to serve them to the best of our abilities to deliver good governance to them,” he said.

He added that the state Ministry of Justice should as well be under his supervision.

While addressing newsmen, the new deputy governor pledged to build on his previous performance by supporting Makinde in providing good governance to the people of Oyo State.

NAN reports that the swearing ceremony was attended by the Speaker, Mr Debo Ogundoyin, Chief of Staff to the Governor, Segun Ogunwuyi; Secretary to the State Government, Olubamiwo Adeosun; Commissioners, some members of the state House of Assembly, among others.

Lawal, 58, hails from Kisi in Irepo Local Government area of the state.(NAN)