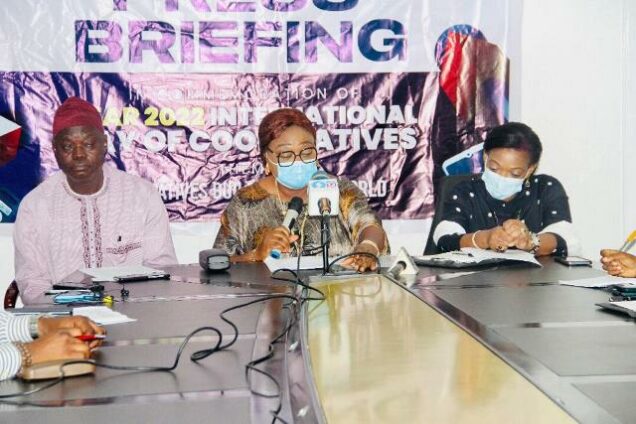 The Lagos State Government on Tuesday said it will continue to create enabling environment for cooperative societies to thrive in the state so that they could achieve their respective goals.

Commissioner for Commerce, Industry and Cooperatives, Dr. Lola Akande stated this at a news conference to commemorate the 2022 International Day of Cooperatives (IDC) in Alausa, Lagos.

Akande said the state government recognised the significance of Cooperative Societies, as associations and enterprises through which citizens could effectively improve their lives while contributing to the economic, social, cultural and political advancement of their communities, state and nation.

“Consequently, government seeks to create an environment in which Cooperative Societies can participate on an equal footing with other forms of enterprise and develop an effective partnership to achieve their respective goals,” she said.

According to her, to achieve this objective, the state government is concerned with providing and ensuring the sustenance of an enabling environment for the development of Cooperative movement.

She added that a robust partnership between the Lagos State Government and Cooperative Movement was germane to the growth of the Sector.

However, Akande noted that the state government shall celebrate this years’ International Day of Cooperatives (IDC) in a week-long celebration starting from Tuesday 19th to Sunday 24th July, 2022 due to some exigencies.

She said the IDC is an occasion where the public are educated on issues of concern, to mobilize political will and resources to address global problems, and to celebrate and reinforce achievements of humanity.

The commissioner stated that the theme of this year’s celebration, “Cooperatives: Build a Better World,” is tailored toward the main field of action of the United Nations, such as the maintenance of International peace and security, promotion of sustainable development, protection of human rights, and the guarantee of international law and humanitarian action.

She added that the theme is about human-centered business model, which is an innovative sustainable business ecosystem that provided tools and inputs to the private sector, public authority and consumers when developing new businesses.

Akande disclosed that tivities lined up to mark the week-long event included press briefing, commissioning of concerned community project in Alimosho, Ogba and Agege on Thursday, July 21; Jumaat Service at the Alausa Central Mosque on Friday from 1.00pm while there will be sporting activities the same day.

She added that Governor Babajide Sanwo-Olu is expected to be the Special Guest of Honour at the event, while there would also be inspection of exhibition stands.

The event will be concluded on Sunday, July 24, 2022, with a thanksgiving service at the Chapel of Christ the Light, Alausa by 10.00am.